Hair testing was first adopted by employers as the ‘executive’ level method for employment drug testing. To this day, hair testing has proven its effectiveness and continues to play a vital role in ensuring security and safety within our nation’s workplaces. Hair testing presents many advantages over other types of testing; however, it’s essential to recognize its strengths and limitations. A balanced test methodology approach may best help you accomplish your goals.

US Drug Test Centers is your go-to provider for hair drug testing in all areas of the United States; for both individuals and employers. Same-day service is available with a three- to four-business day turnaround for the results of hair drug testing.

How Does Hair Testing Work?

Hair testing is a quick, non-invasive, and pressure-free experience! No worrying about ‘holding it’ or being able to ‘provide a specimen’ when it’s time for the collection, donors visit one of our thousands of collection sites, check in and complete the collection process. .

Hair testing does require removing more than one strand of hair, and for employment drug testing, hair samples cannot be provided from a brush or another unverifiable source - it must be taken directly from the donor’s head or another area of the body. For the analysis to be effective, the collector will obtain, under direct observation, a 100-milligram sample of hair (approximately 90 to 120 strands) cut with scissors, preferably at the crown of the head. The hair strands are cut from as close to the scalp as possible. The collector can remove hairs from different spots on your head to avoid creating a bald spot.

For donors with very little or no head hair, the collector might use body hair, as deemed appropriate, for the test instead.

The collector will then secure the hair-strand sample in foil, completes the chain of custody documentation process, and will prepare the specimen for shipment to a testing laboratory. Since hair samples are obtained under direct observation, in full view of the collector, the process nearly eliminates the likelihood of sample adulteration or specimen substitution.

A hair drug test is nearly impossible to cheat. Even if a donor uses certain shampoos or products that claim to cleanse hair follicles and help you ‘beat the test,’ these products are unlikely to remove the drug metabolites from within the hair strand. As a funny twist to cheating attempts, hair washing helps remove external contaminants, benefiting the hair testing process. Because the sample is often collected in person, it would be incredibly complicated to substitute a hair sample.

When employers consider the different employment drug test methods available, they should focus on what they are trying to accomplish. Is the goal to prevent drug users from entering your workplace, are you trying to detect drug users so you can remove them from your workplace or offer them help with a drug or alcohol problem, or both? Choosing the right test method to meet your goals can be a critical decision.

Hair testing provides the most prolonged detection period when screening for illicit drug use or prescription medication misuse compared to that of urine, blood, sweat, or oral fluid (saliva). Testing via hair will be able to detect a pattern of repeated drug use from approximately a week after the last use up to several months since last use (one week to 90+ days). 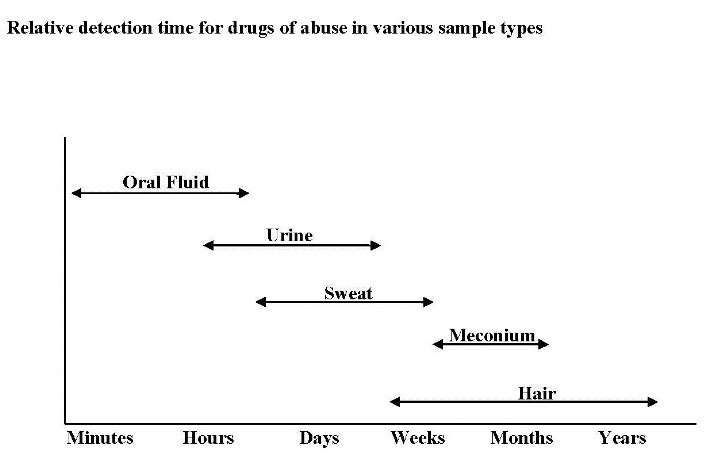 Hair follicle testing is flexible in drug panels and can also test for EtG alcohol in hair.

The laboratory results from hair testing have been routinely admitted in both state and federal courts, as well as arbitrations and agency hearings; and are routinely upheld. Some court systems use hair analysis as part of their probation, parole, and diversionary programs.

Employers should consider state and Federal laws when implementing hair testing programs. Compliance experts at US Drug Test Centers can help you determine the legality of any drug testing methods in your state.

Employers throughout the United States are now implementing hair testing programs due to the benefits this alternative specimen offers. Order yours online today or call 866-566-0261.

Other Uses for Hair Testing

When this is the case, parents usually ask if hair collected from a brush can be used. The answer is yes, but the test will be reported as having an "anonymous" donor. It’s not possible to attribute the sample to any specific person, and we cannot determine the time frame of the test, so the test result is not legally defensible.

Please note that not all of our testing centers are available for "anonymous" donor hair testing. This type of testing is only performed at our specialty laboratories.

At US Drug Test Centers, we work with individuals, court systems, child protection agencies, and attorneys for hair testing.