THE KIDS ARE ALRIGHT? Youth Drug Use Across America 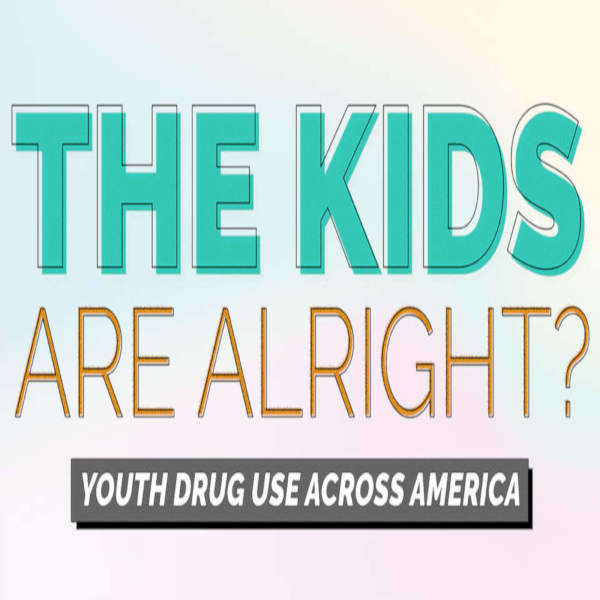 Since the early 1970s, the United States has spent more than $1 trillion [1] fighting the so-called War on Drugs. Today, more than 84% of all drug-related arrests are for possession only, and a person is arrested every 25 seconds for drug possession.

What do we have to show for 40-plus years of costly drug policy? Drug overdoses cause more deaths [2] than any other type of injury, including vehicle accidents and gun deaths, and more than 1.6 million people [3] were arrested for drug-related offenses in 2018 alone.

It’s safe to say there have been few victories to celebrate in America’s attitudes toward drugs, but one bright spot can be seen in the use of illicit substances by teens and tweens in recent years: Use of weed, alcohol and hard drugs by children between the ages of 12 and 17 have all dropped over the past decade, according to estimates [4] by the Substance Abuse and Mental Health Services Administration (SAMHSA).

Most discussions of the impact of drugs in the U.S. focus on the overall effect, including arrest, use and abuse data of adults, young adults and teens, but we wanted to look specifically at how common the use of drugs and alcohol is among children and young adults and how usage rates may have changed over time.

What was found was that, as referenced, the youngest age group is generally using substances less frequently, the same can’t necessarily be said for those between 18 and 25, and for all age groups, huge variations in rates can be seen across the United States.

Among all illicit substances, meaning those that are generally classified as illegal for everybody regardless of age, marijuana is by far the most popular, with an estimated 44 million Americans using weed in the past year, according to SAMHSA’s 2018 national report [5]. About 1 in 8 adolescents and 1 in 3 young adults had used marijuana in the past year, but fewer than that partook regularly.

On the state level, the most recent available data is from 2017 and shows that regular weed use is far more common for young adults (ages 18-25) than for adolescents (ages 12-17) and that the youngest Americans mostly are cutting their use of marijuana. 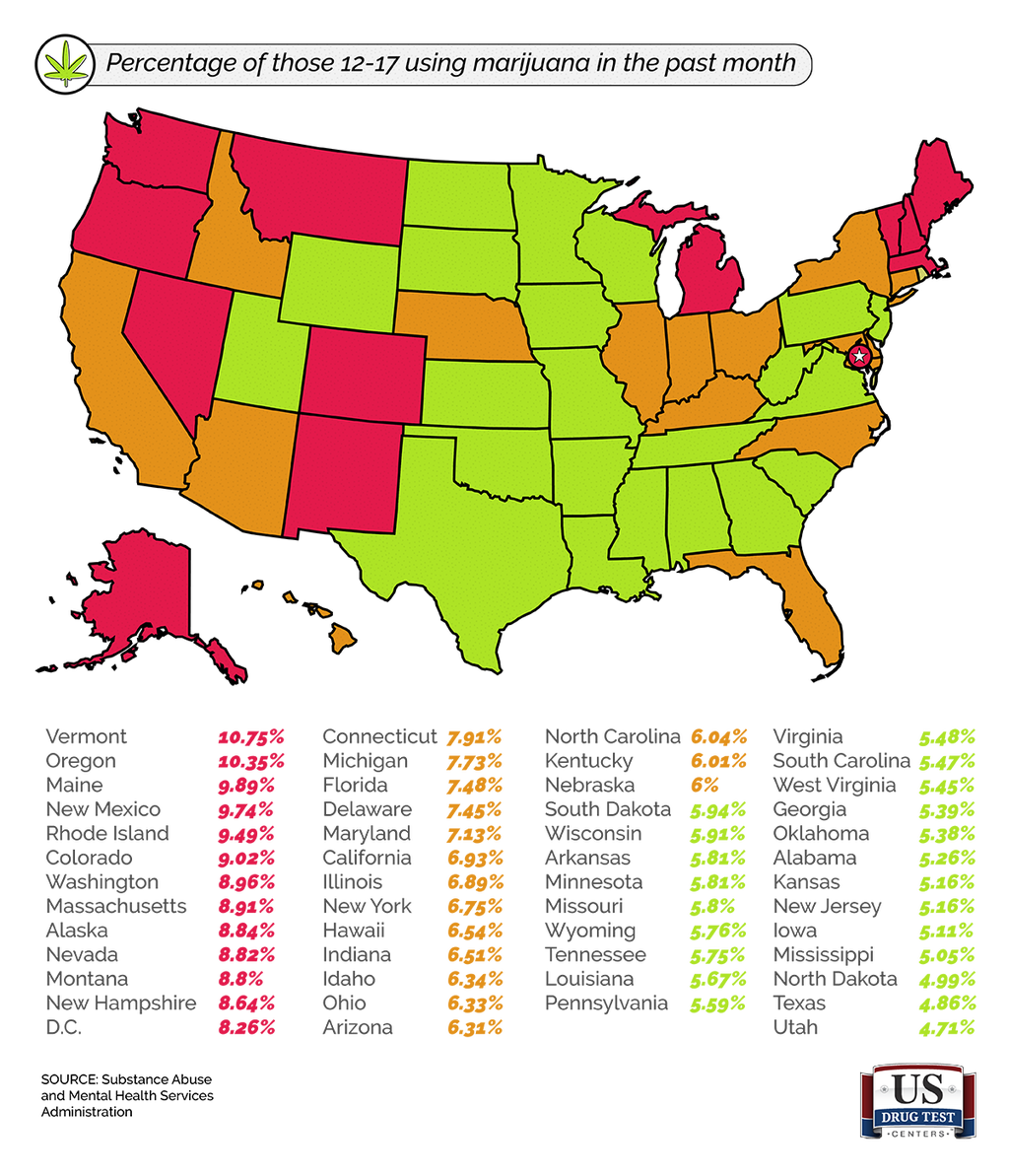 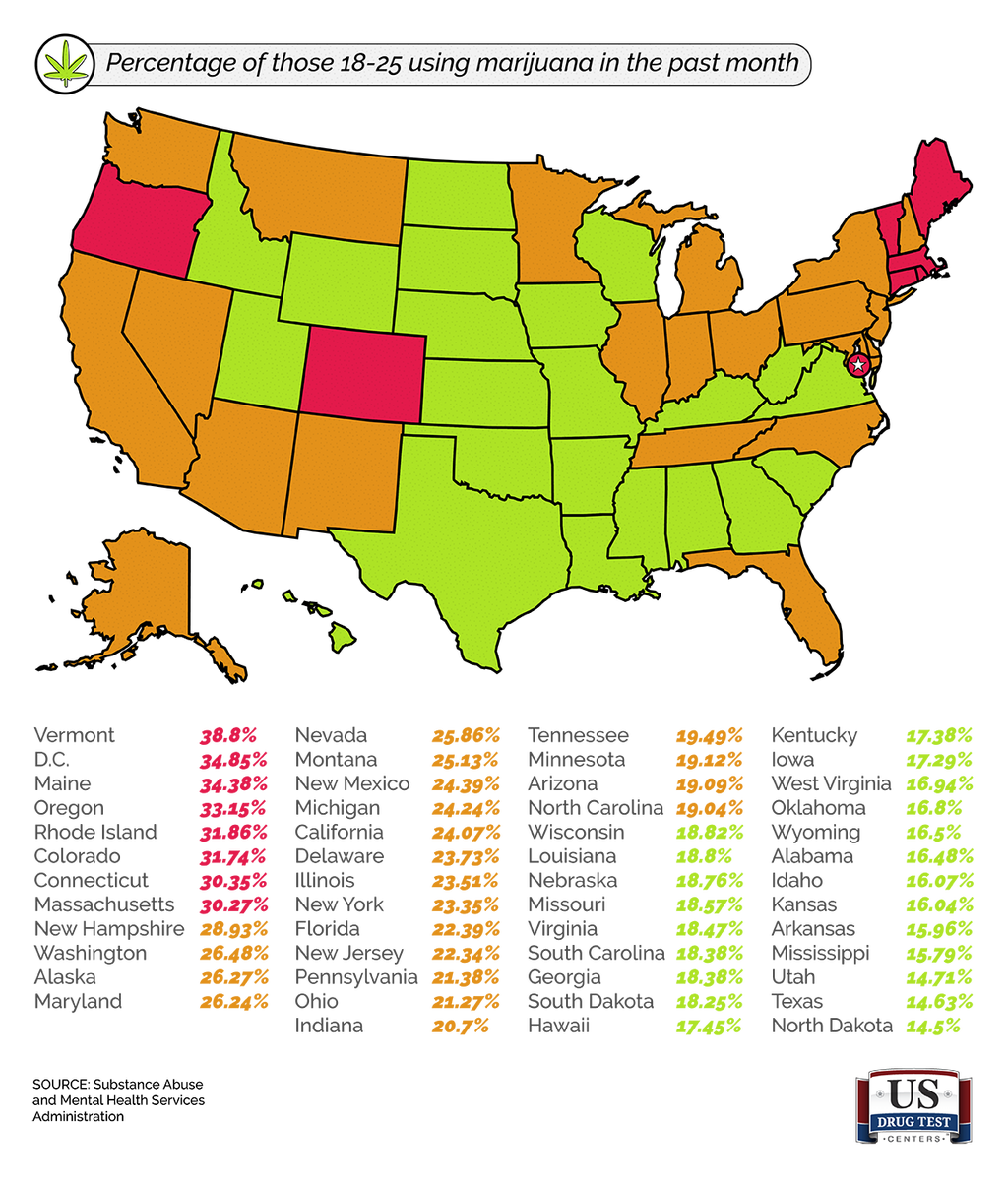 In only two states do more than 10% of adolescents regularly consume marijuana, and it should be noted that even though recreational marijuana is currently legal in both Vermont and Oregon, during the collection period for this data, it was legal only in Oregon, and it’s not legal in either state for children to consume weed.

Weed use among young adults is far more common, and even in states where usage is lowest, nearly 15% of people in this age group had used marijuana in the past month. Eight states allowed recreational marijuana use during the collection period, and all eight of them rank in the top half of weed consumption by young adults.

About one-quarter of states have seen monthly marijuana use among adolescents increase since 2008, but only three have seen use among young adults fall during that time. 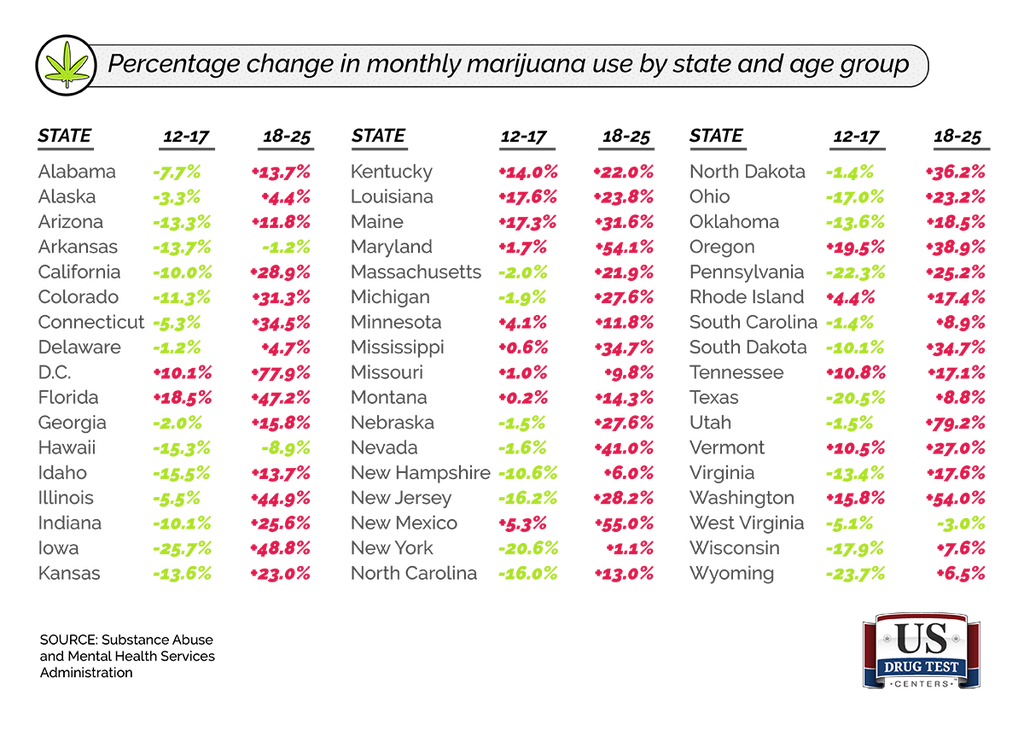 Because alcohol consumption is legal for people over 21, it’s more helpful to look at regular drinking as well as binge-drinking among those for whom it’s never legal to consume alcohol. Among that age group, 12-20, both drinking and binge-drinking are down in most states, though some states have very high percentages of minors who drink. 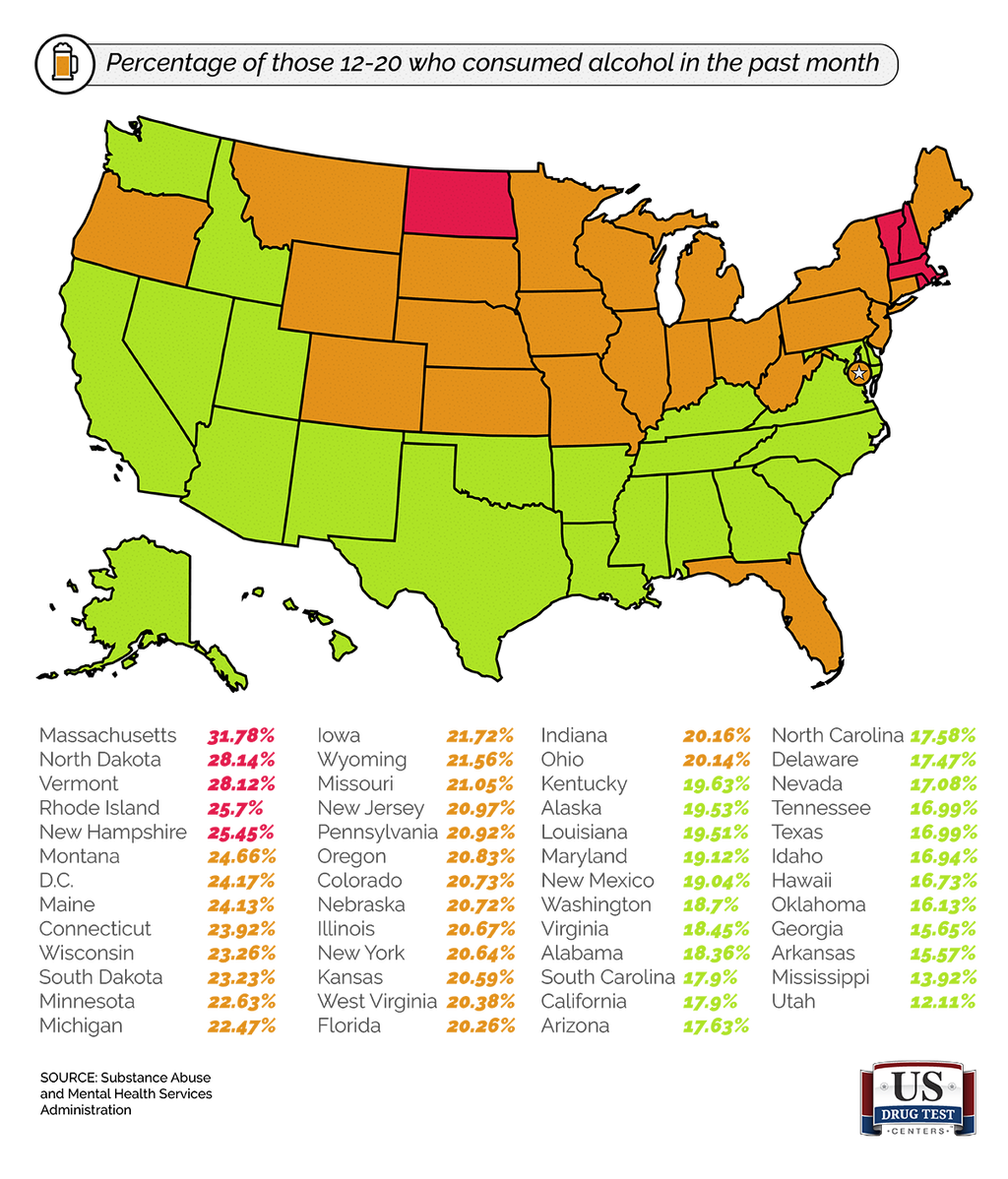 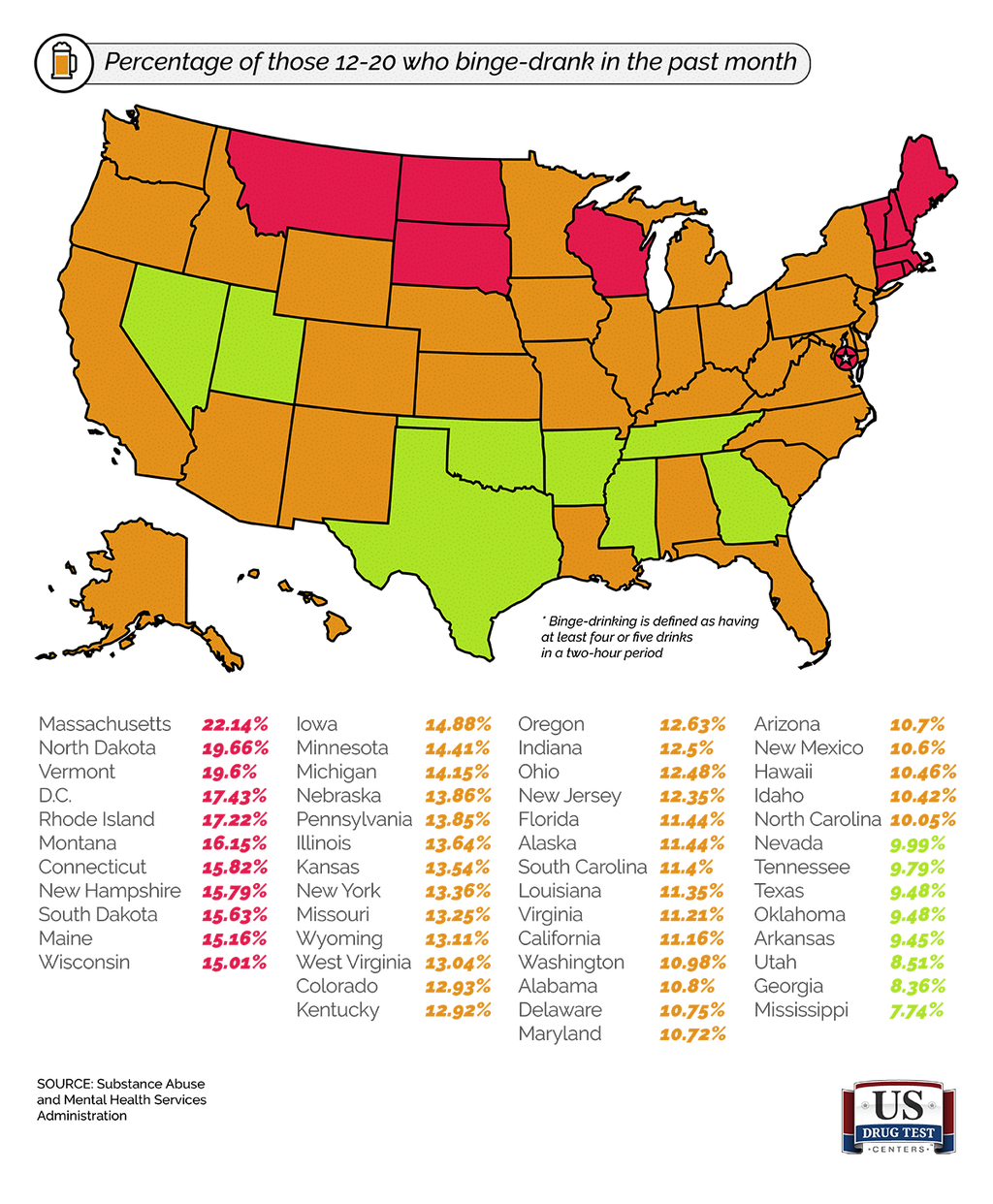 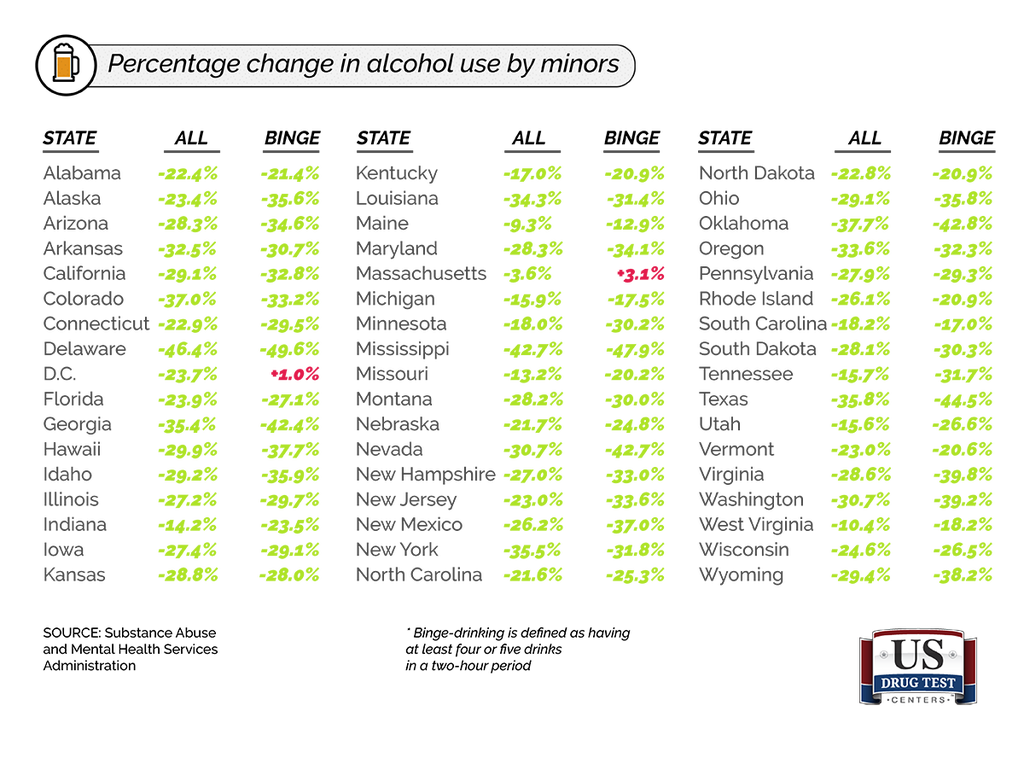 About 18% fewer Americans are regular tobacco consumers compared to a decade ago, and every age group has seen a decline in the monthly use of all tobacco products. But the rise of vaping and other non-cigarette tobacco products creates quite a mixed bag when looking at the state level.

All states have seen tobacco consumption by adolescents and young adults fall, but several have seen an increase in the percentage of young people using tobacco products other than cigarettes, which includes vaping as well as things like smokeless tobacco. 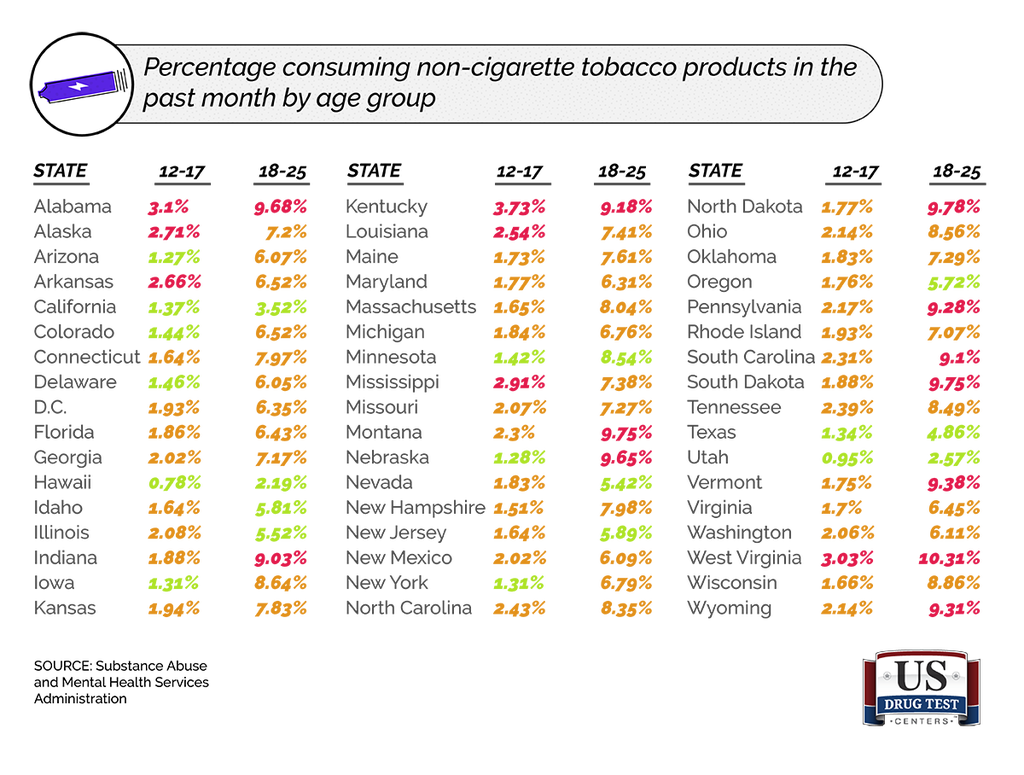 Most states have seen declines in this rate among the 12-17 set, while only about one-quarter of states have seen vaping and other non-cigarette tobacco consumption among young adults climb over the past decade. 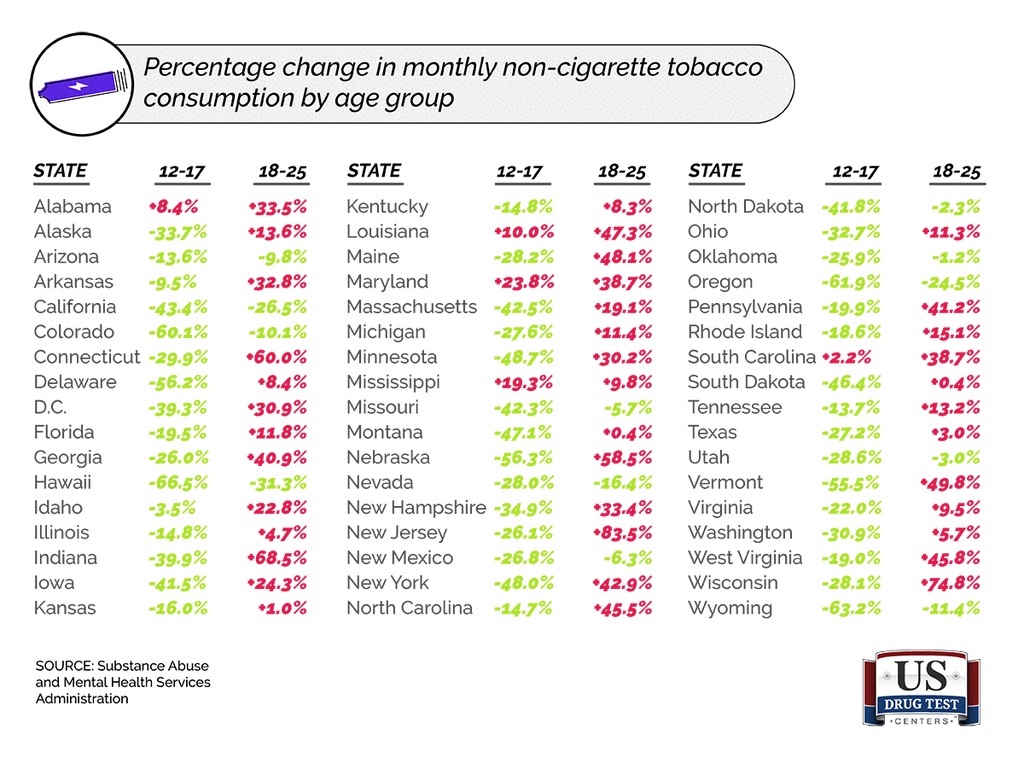 About 4% of Americans have misused prescription pain relievers in the past year, according to SAMHSA’s data, with those 18-25 having the highest misuse rates — 7.13% of that age group have misused such drugs in the past year. Rates of painkiller misuse by young people are highest among those 18-25 living in Indiana, Oregon and Colorado and lowest among those 12-17 in New Jersey and New York. 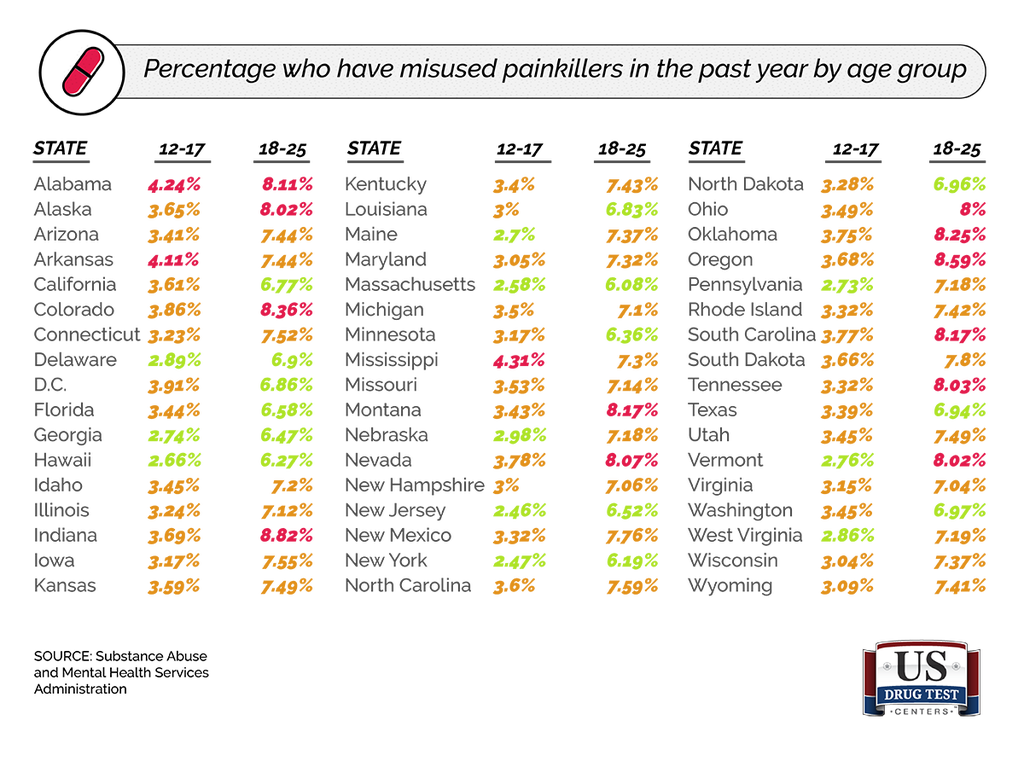 Every state has seen a decline in the percentage of adolescents misusing painkillers, but distressingly, every state has also seen an increase in that statistic among those between the ages of 18 and 25. 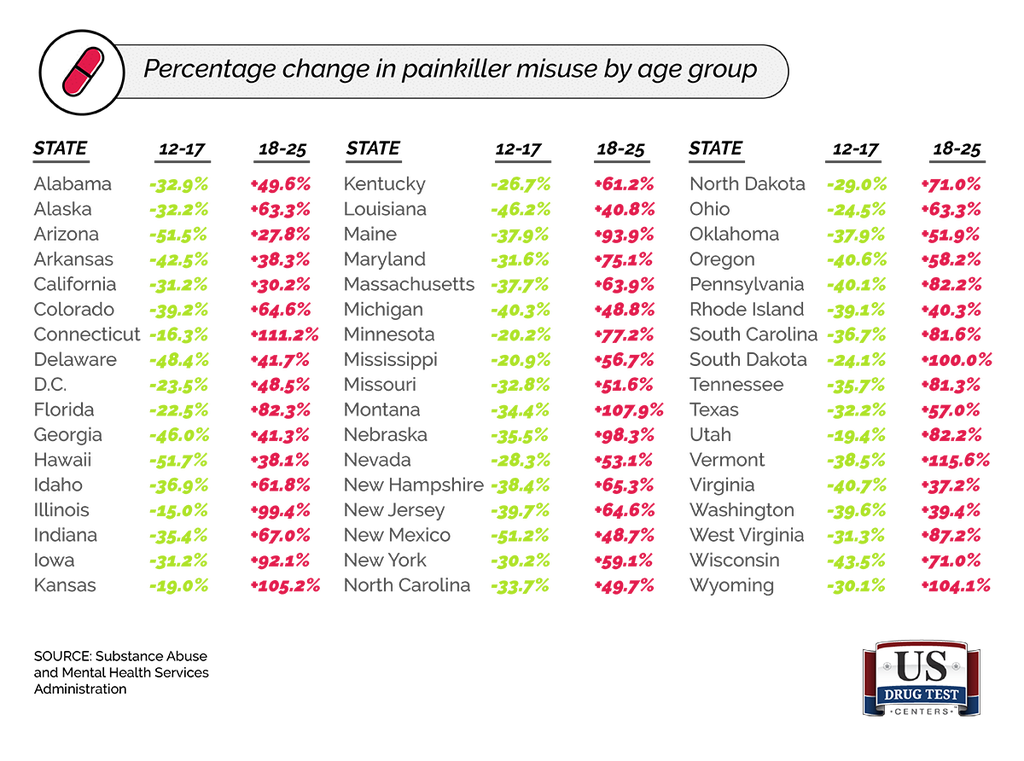 Several states have seen the rate of 18- to 25-year-olds misusing painkillers rise by more than double over the past decade — Vermont, Connecticut, Montana, Kansas, Wyoming and South Dakota all posted 100%-plus increases.

Use of most hard drugs, such as cocaine, heroin and methamphetamine, remains quite rare among all Americans, including youths, though some states have seen a concerning increase in the rate of young adults using cocaine. 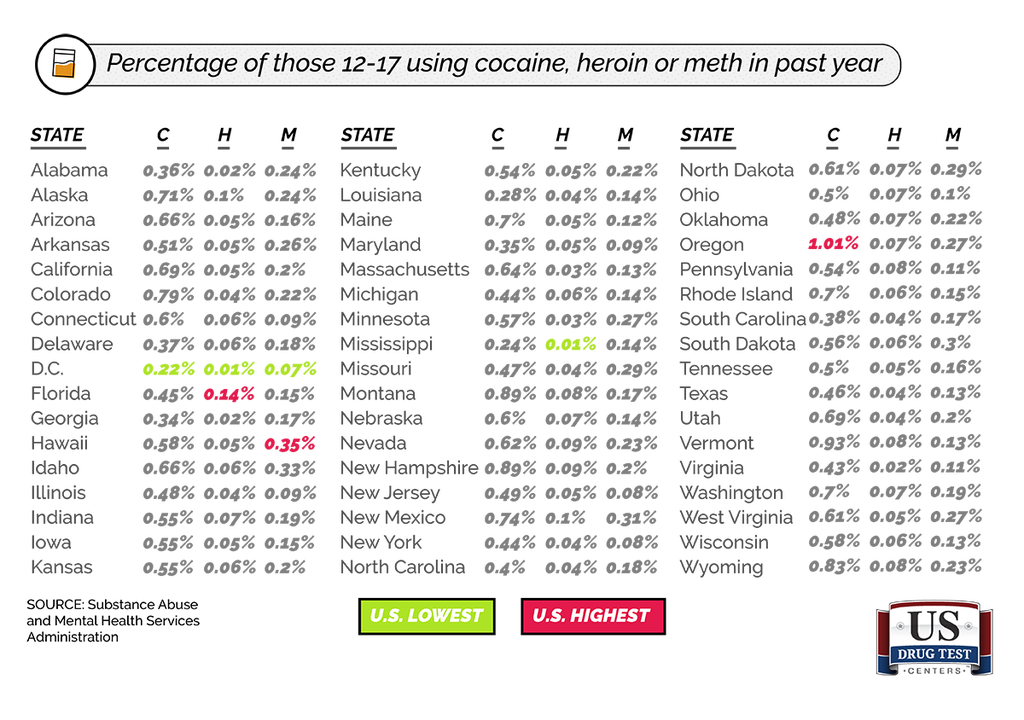 In only one state does past-year consumption of any of these drugs by those between the ages of 12 and 17 eclipse 1% — just over 1% of 12- to 17-year-olds in Oregon have used cocaine in the past year. Unfortunately, the same can’t be said of hard-drug use among young adults with cocaine use averaging a rate of nearly 6% among those between 18 and 25. 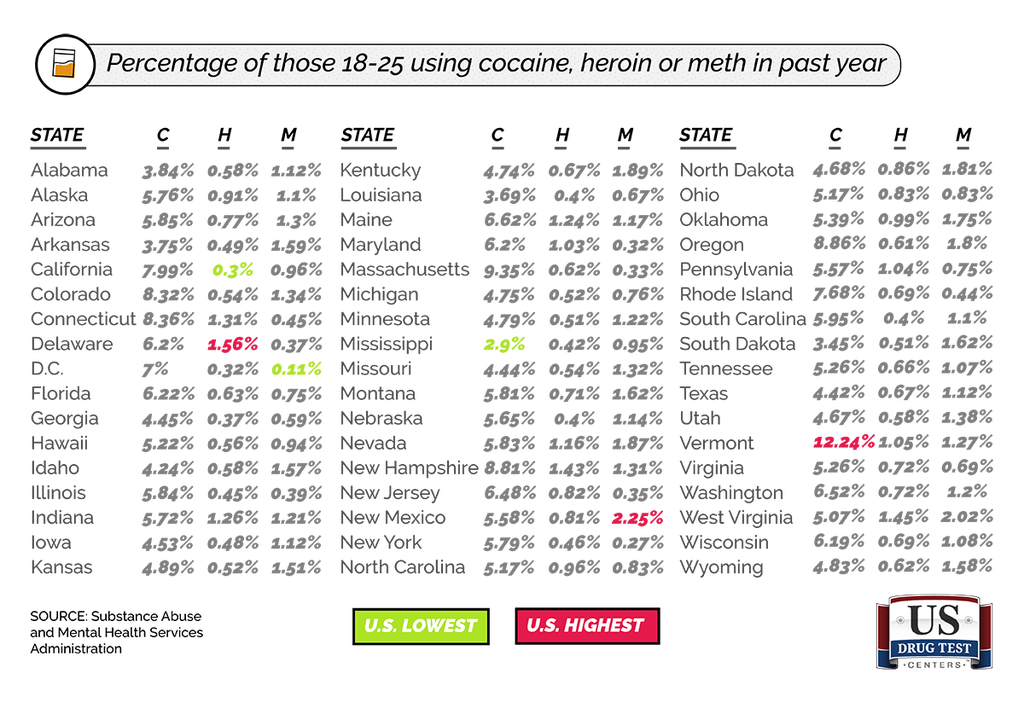 Historic consumption rates for age groups are not available for heroin or meth, but every state has posted a decline in the rate of adolescents using cocaine. However, just over half of the states have seen cocaine use by young adults rise over the past decade. 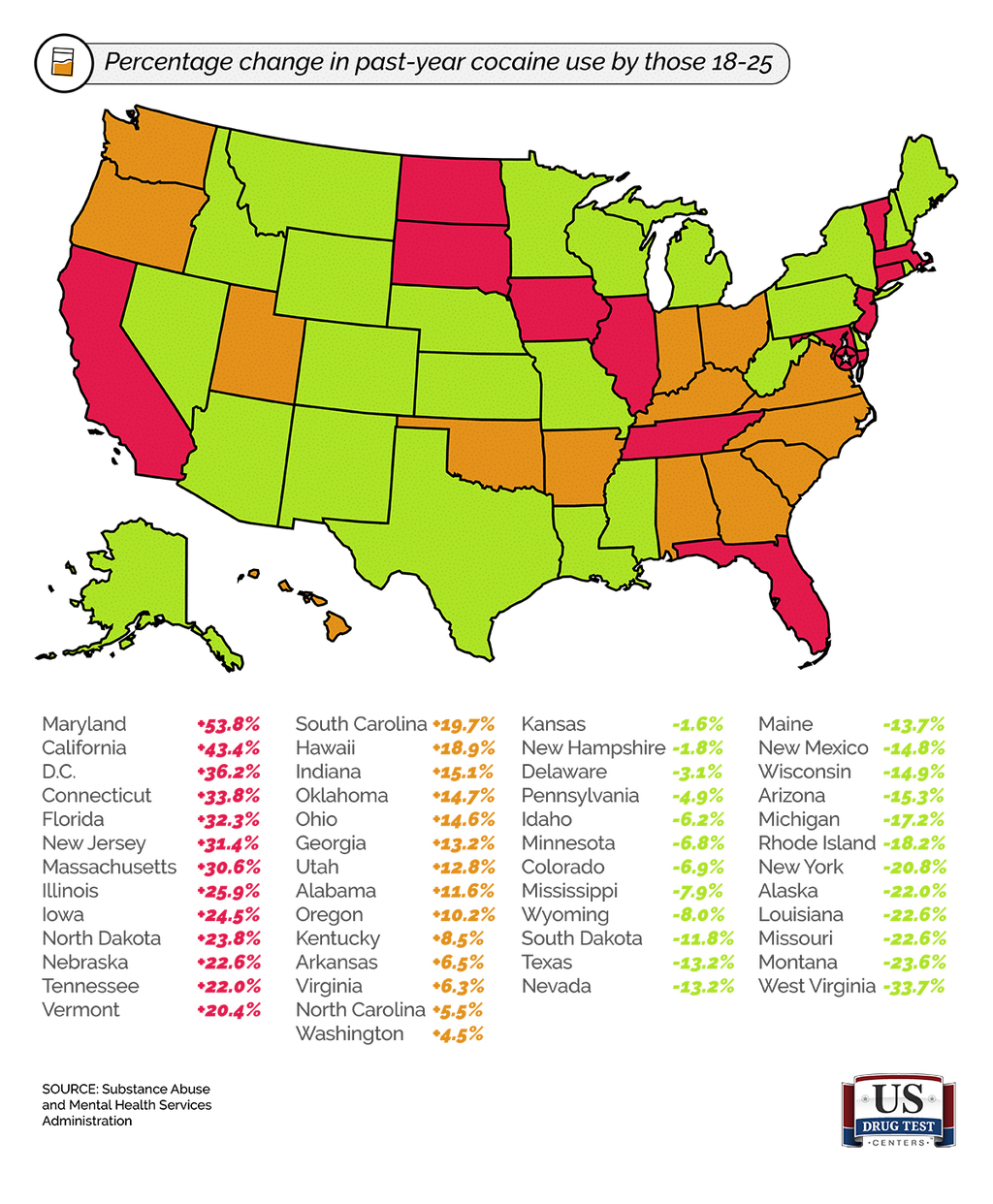 Even when consumption of particular substances is legal, such as drinking alcohol if you’re over 21 or smoking weed in California, there’s a huge body of scientific evidence that indicates consumption of any of these substances by young people, whose brains and bodies are still maturing, may stunt physical and mental development [6]. The good news is that, for the most part, young people are staying away from certain substances in growing numbers, though substance use among young adults remains a huge and, in many cases, rising concern.

As we referenced in the text, the substance use consumption data we discussed here came from various publications by SAMHSA, the Substance Abuse and Mental Health Services Administration, which is part of the U.S. Department of Health and Human Services. SAMHSA publishes annual data on substance use and mental health among Americans, and every other year, the agency publishes data that breaks down drug use rates by state and age group. The most recent full collection period was 2016-2017 [7]. Where possible, we compared the 2017 data to past figures. In a couple of cases, we consulted some additional tables on binge-drinking [8] and non-medical use of pain relievers [9].

All other data sources are linked in the text.

Knowledge is power; any data and images on this page are free to share for editorial or non-commercial purposes. All we ask is that if you wish to share anything you’ve seen here with your audience, please provide a link back to the URL of this page.