The Economics of Marijuana
How Much Have States Made From Weed Taxes, and at What Cost? 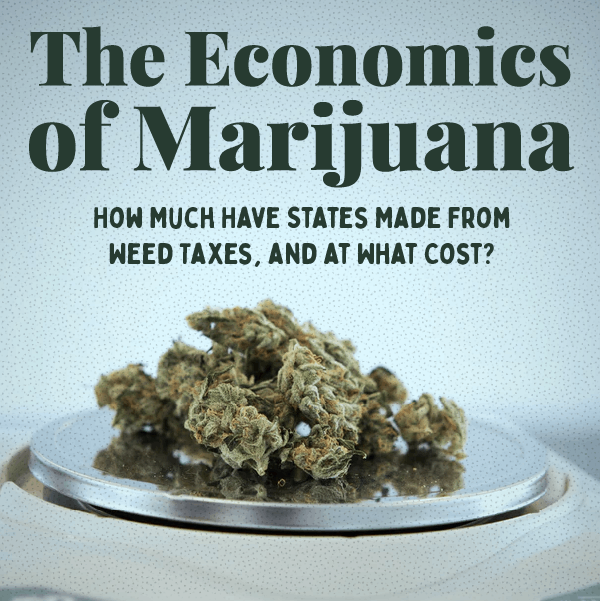 In 17 states, recreational marijuana has been decriminalized or fully legalized. Ten states have established systems to charge marijuana sellers and buyers taxes to fund a variety of services.

Of the states where weed is legal, the majority are still working out structures for establishing and collecting marijuana taxes, which includes sales tax, cultivation tax and other excise taxes.

Colorado and Washington were the first states to fully decriminalize marijuana, with both states passing ballot measures in 2012, and Colorado’s weed dispensary industry was the first to become operational in 2014.

Given that it’s been nearly a decade since Colorado blazed the trail, what do we know about the economic impact of legal, taxed marijuana and if there have been unintended consequences? To understand, we analyze state tax revenue data for all available years, as well as marijuana use data reported by federal authorities.

Read on for our full analysis and take a look at some key findings below:

Where Is Marijuana Legal? 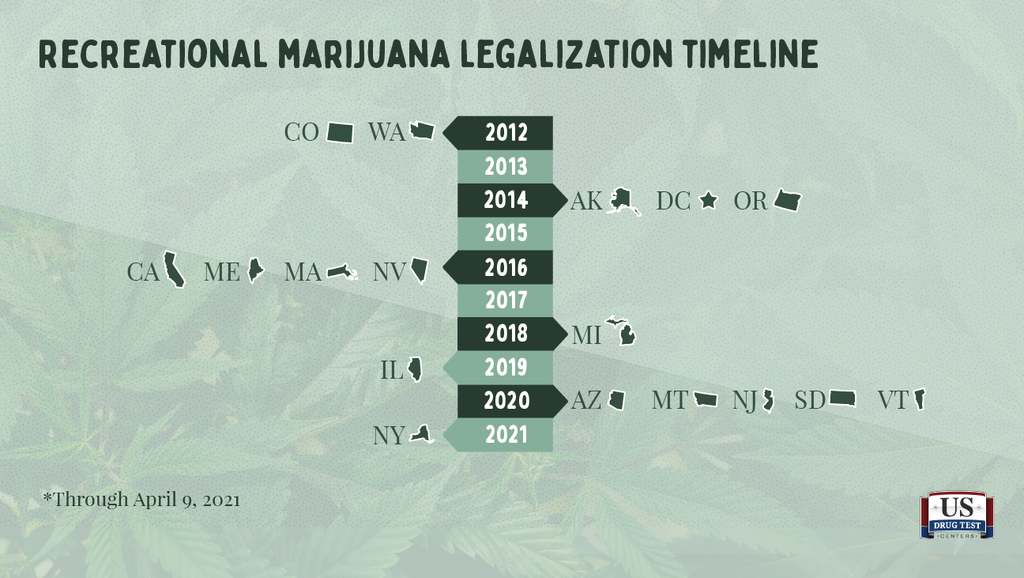 A combined 130 million Americans live in states where recreational marijuana is legal for adults, though not all of these states collect sales, excise and other taxes on sales. Still, that means that about one in three Americans resides in a legal-weed state.

In 10 states with recreational marijuana, taxes are collected on the sale and purchase of weed. How states spend the money varies, as does the amount collected and its impact on state funds.

Combined in 2020, those states collected $2.5 billion in taxes from marijuana sales, some of which includes medicinal dispensaries. California collected more than $1 billion in 2020, the highest among states that collect weed taxes, while Alaska took in about $24 million. 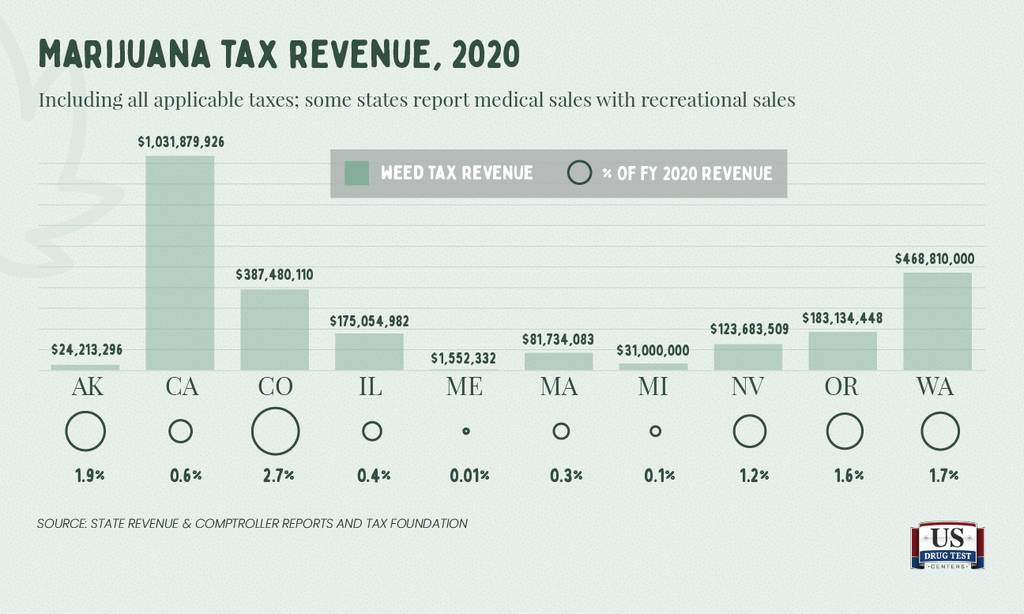 In Arizona, where voters approved a legalization measure in 2020, the state agency collected more than a half-million dollars in marijuana taxes in January 2021, the first month of sales. Taxation of recreational marijuana started in Maine in 2020, with tax collections totaling more than $1.5 million in less than a year.

Of course, regardless of state laws, marijuana remains illegal on the federal level, though more states are expected to decriminalize the drug this year, including New Mexico and Virginia, where legislators have passed bills that have yet to be signed or vetoed by their respective governors.

Where does this money go? Here’s a look at some ways states spend their cannabis cash:

Learn more about how marijuana taxes vary by state here.

The changing societal views on marijuana are well-known, and perhaps the biggest evidence for them is the mounting number of states that have voted, whether through the people or their representatives, to decriminalize the drug.

According to a 2021 survey by The Hill, 38% of people say the federal government should legalize marijuana, while another 37% said the states should decide. Only a quarter of people said they felt weed should remain illegal everywhere.

It shouldn’t come as much surprise, then, to learn that marijuana use is on the rise among some groups, even in states where it’s not legal for anybody to use the drug.

The most recent estimates from the Substance Abuse and Mental Health Services Administration indicate that about 17% of American adults have used marijuana in the past year, while a smaller percentage used it in the past month (11%). About one in four adults, nearly identical to the number in The Hill survey who said weed should remain illegal, perceive marijuana use to be a great risk.

Use is increasing among American adults, with every state seeing an increase in the percentage of regular pot use, meaning use in the past month. 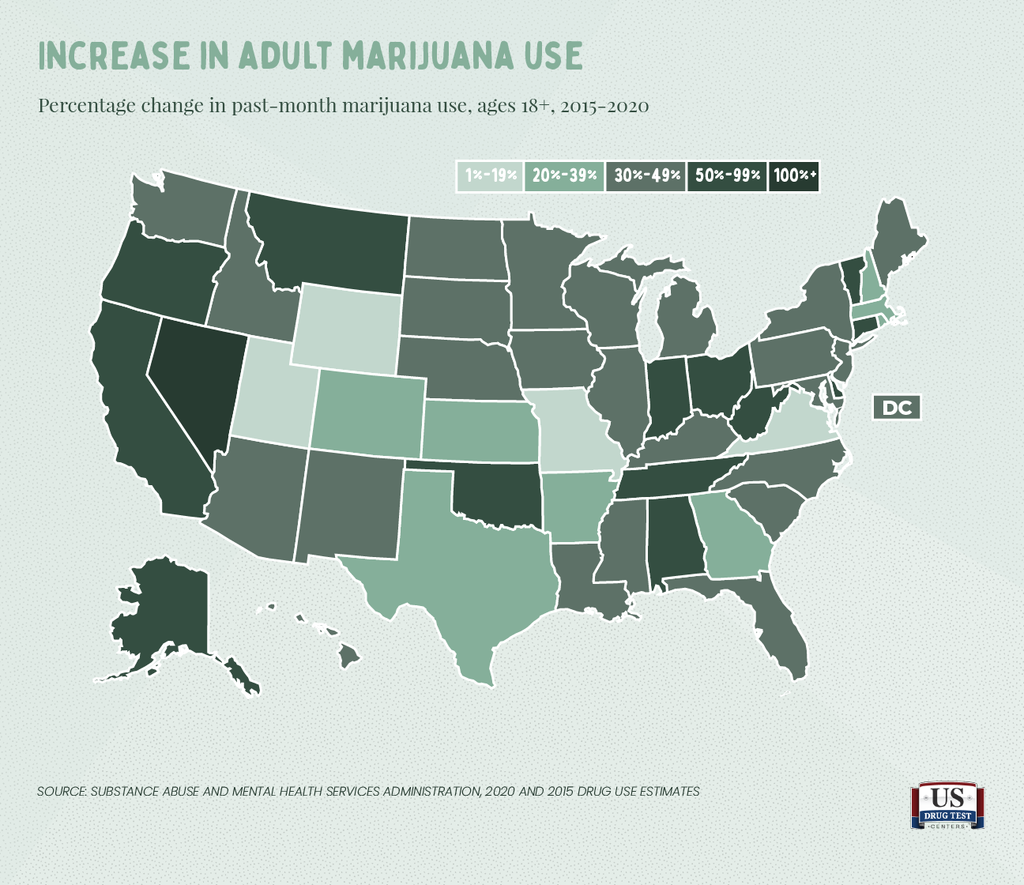 While marijuana use has increased among adults over the past half-decade, at least on a national level, it’s gone down among youths, though the change has been slight, and many states have seen huge jumps in adolescents using weed.

Notably, in the regions where legal-weed states are largely clustered, the West and Northeast, marijuana use among young people has declined the most. 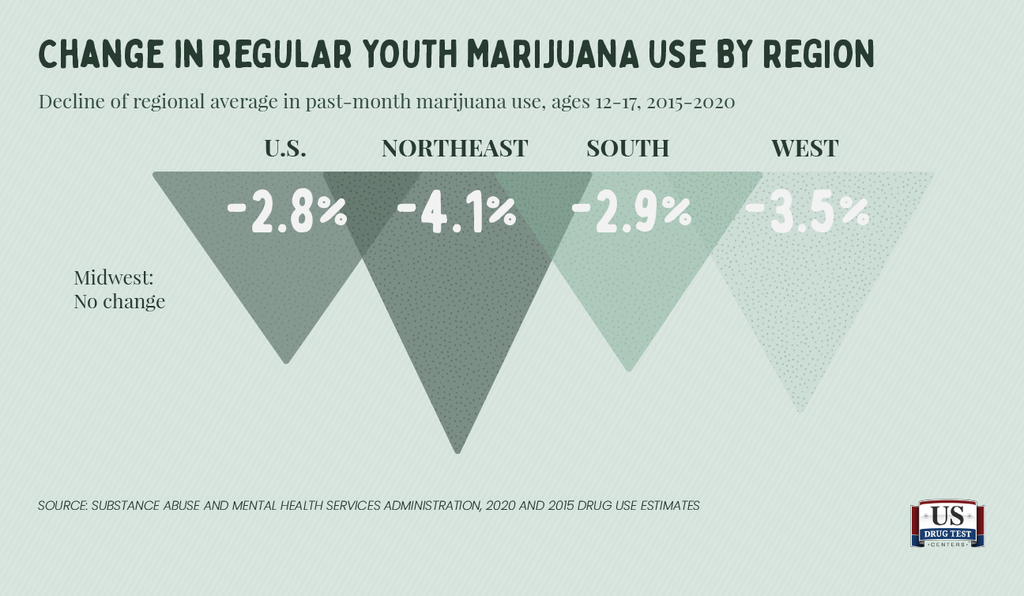 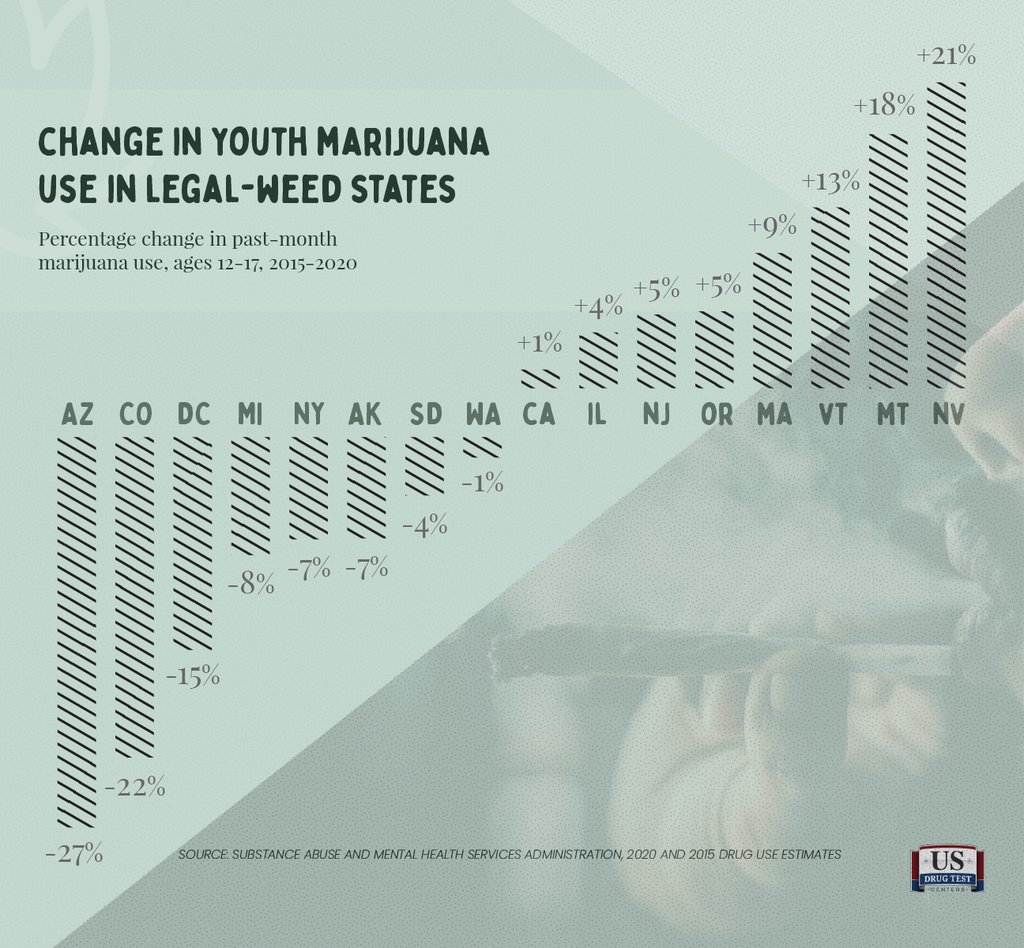 Where Does Your State Rank for Marijuana Use?

Vermont has the highest rate of past-month weed use for both young people and adults, while Utah ranks 51st and 50th, respectively, for recent adolescent and adult marijuana use. See the table below for your state’s marijuana use rates and ranks.

Even as more voters and lawmakers embrace the notion of removing legal restrictions on the use and sale of marijuana, the drug remains illegal on the federal level, though some Democratic senators have suggested they will pursue legislation in Congress to make marijuana legal federally.

Still, the majority of Americans live in states where the drug is not legal, and even in places where it is, there does not seem to have been a massive increase in pot use, judging by both drug use statistics and tax collections.

The state tax revenue included in this analysis was gathered directly from state government websites that list excise, sales, cultivation and other taxes levied against sellers, buyers and growers of marijuana.

Where possible, we used calendar-year data, but only fiscal year data was available for Massachusetts, Michigan and Nevada.

Estimates of drug use and perceptions of marijuana’s risks were from the most recent publication by the Substance Abuse and Mental Health Administration. Their most recent data was published in December 2020, and we used the same publication from 2015 for comparisons. These federal reports cover two-year periods, usually the two years prior to their release, so the 2020 data covers surveys conducted over the two-year period between 2018 and 2019.