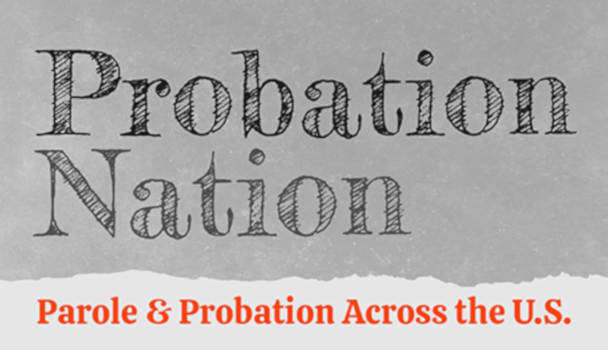 Parole & Probation Across the U.S.

The issue of mass incarceration has become a major topic for political debate on both the left and right, but Americans increasingly agree that there are multiple factors relating to law enforcement and criminal justice that could stand to be reformed.

In fact, this is one of precious few areas in which bipartisan agreement is even possible these days, as consensus is growing on all sides of the spectrum. Some of these issues have made for political bedfellows that seem very disconnected, like Donald Trump and Kim Kardashian. [1] And just last year, a bipartisan bill was signed into law that aims to reduce recidivism. [2]

Probation and parole, referred to in many states as community supervision or community corrections, have long been considered ideal tools for ensuring public safety while reducing the prison population. But they, too, are used in eye-popping numbers across the United States.

Despite very recent attempts at reducing the number of people imprisoned across the country, the U.S. has more than 2.3 million people behind bars and millions more — almost twice the number, in fact — in the probation and parole system. And on a given day, about 1 in 4 people who are incarcerated in state prisons are there as a result of a violation of their parole or probation, including new offenses, failed drug tests or missing appointments with officers. [3]

Parole and probation violations are common after failed drug tests, which could include a person testing positive for alcohol or marijuana, which are legal in some cases, but also harder drugs like cocaine and amphetamines as well as over-the-counter medications like hydrocodone and oxycodone.

In addition to contributing to broken probation or parole agreements, drugs are helping fuel mass incarceration, and those offenses are among the most common reasons people end up incarcerated in the first place. Drug offenders account for 45.4% of all federal prison inmates, according to January 2020 data from the Bureau of Prisons, and drug abuse violations accounted for nearly 20% of new arrests in 2018, the FBI reported. [4, 5]

Taking both the number of people actively incarcerated and those who are on probation or parole, about 1 in 37 adults, or more than the entire population of Massachusetts. But just as rates of incarceration vary from state to state, so, too, does the use of probation and parole as a criminal justice tool.

To understand how these populations vary across the country, we’ll look at the most recent data available from the U.S. Bureau of Justice Statistics, the Prison Policy Initiative and the Council of State Governments Justice Center.

More than 6.7 million adults are incarcerated, on probation or parole or otherwise confined in corrections facilities. About half of them, 3.6 million, are on probation, making probation more common than incarceration by more than 1 million people. [6]

No state imprisons more people than Oklahoma, which recently surpassed Louisiana for the highest rate of incarceration, not just in the U.S. but in the world, according to a Prison Policy Initiative (PPI) released in 2019. But when the view shifts to the rate of probation and parole, Oklahoma tumbles all the way to No. 39. [7] 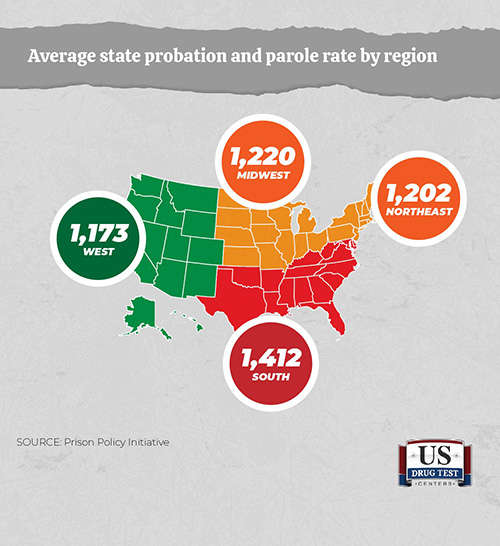 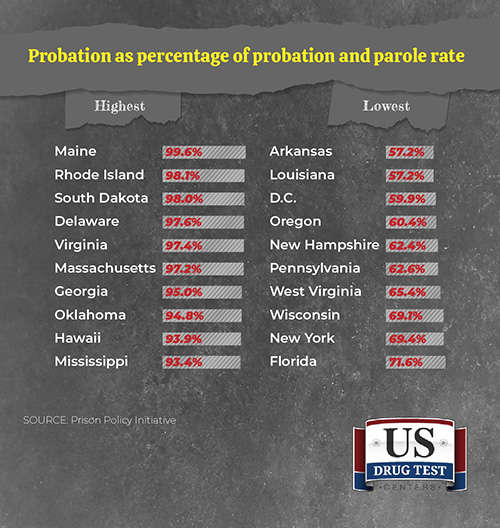 How Have Rates Changed?

Understanding where states stand when it comes to probation and parole today is helpful and instructive, but the recent past has seen enormous swings in these rates from state to state. Over the most recent five-year period for which the U.S. Bureau of Justice Statistics (BJS) has published data (2012-2016), the vast majority of states have seen probation and parole rates decline. [8, 9]

There’s a big caveat to this data: Unlike in the previous section in which we relied on an analysis of data gathered just last year from state-to-state, the BJS data is not all-inclusive of every possible type of supervision, as the PPI data was, and the most recent publication covers only through 2016 despite being published in 2018. Additionally, PPI’s data compares community supervision populations to all residents, while the federal data covers adults only.

Still, understanding recent trends is important for getting a sense of the unpredictability of probation and parole on the state level.

*2012-2016; 2016 data for Georgia and Michigan was unavailable, so their change rates could not be calculated

Eight states have increased their use of probation and parole as criminal justice tools, though most of those states do not have especially high rates of those tools today. Only two states where the probation and parole rate is higher than the overall U.S. rate saw the use of these tools rise over the five-year period, according to BJS data.

Some states, on the other hand, remain high on the list of present-day use of community supervision despite their rates falling between 2012 and 2016. The District of Columbia, for instance, had two of the biggest declines but both have community supervision rates that are higher than the overall national rate.

How Common Are Violations?

Probation and parole are both meant as alternatives to incarceration. While they are similar in that convicted offenders remain under supervision instead of being in prison, they certainly have very different connotations. A person who is on parole is released from prison to serve the remainder of their original criminal sentence under a variety of types of release, while a person probation usually has not gone to prison. 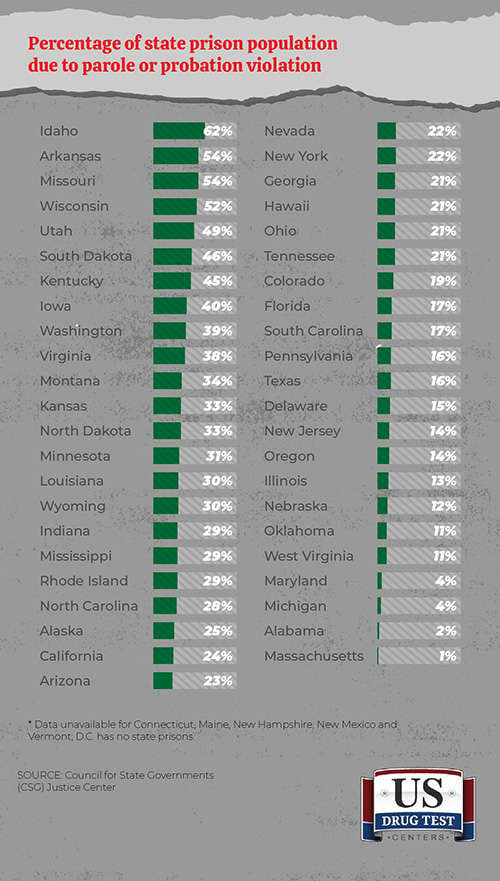 Among the states that reported their data to the Council for State Governments (CSG) Justice Center, four states said more than half the people in their prisons are there for parole or probation violations. In another nine, that’s the case for more than 1 in 3 prisoners. Only four states who reported data had violator prison populations that were outside double digits.

Criminal justice is a sensitive and complex topic that gets at the very heart of what makes a functioning society. How we deal with those who break the law speaks to a host of issues, from how seriously we take bad acts to how hopeful we are that people can learn from their mistakes. But the often-circular nature of probation and parole as an alternative to incarceration could be worthy of further study if trends that are currently notable continue.

As we mentioned at the top of this article, our data came from three main sources. Here’s a look at each source and what data we used from them.