Drugs In The Workplace 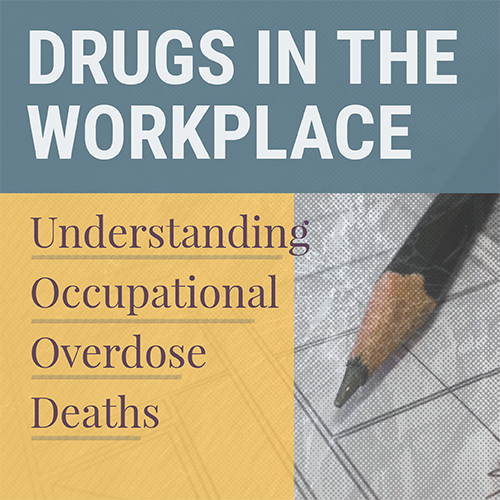 While federal health officials believe the rate of drug overdose deaths declined in the U.S. between 2018 and 2019, over the past 10 years, about half a million people have died due to accidental drug overdoses. [1, 2]

It would stand to reason that overdose deaths would occur in places other than the home, but sheer scale of the crisis is difficult to overstate: According to data from the U.S. Bureau of Labor Statistics, the number of workplace deaths due to accidental overdoses of drugs or alcohol increased by 317.8% between 2011 and 2018. [3]

There’s no doubt that for most people, being drunk or otherwise under the influence during work hours isn’t likely to be a benefit to their work performance, and for some people, workplace intoxication can be incredibly dangerous, exposing them to all sorts of potential injuries, and even death. But, as the BLS data shows, for a growing number of people, workplace substance use is a threat all on its own.

Let’s take a closer look at statistics surrounding workplace overdose deaths, including how the data is calculated and which states have the highest rates of such deaths. But one important note: The BLS data we consulted for this story does not indicate if employers have anti-drug and anti-alcohol programs in place or what the results were of any drug testing done on workers who suffered less-than-fatal workplace injuries, so the picture of intoxication while at work is likely even worse.

Still, a plain reading of workplace overdose deaths should be, quite literally, sobering.

In 2018, a total of 305 workers died from accidental overdoses of drugs or alcohol while on the job, according to the Bureau of Labor Statistics’ 2018 Census of Fatal Occupational Injuries. That represents just under 6% of all workplace fatalities in 2018, which is a relatively small percentage. [3]

However, when considering the growth in workplace overdose deaths, this problem is anything but small, and overdose deaths while on the job have risen by 317.8% since 2011. 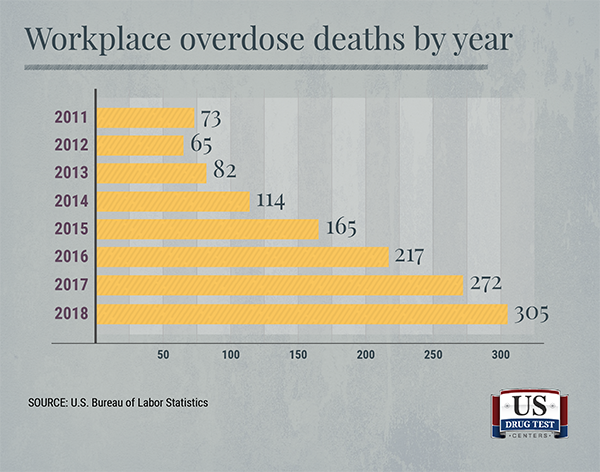 Men and those between 25 and 44 represent the lion’s share of overdose deaths at work, with women accounting for only about 1 in 10 workplace ODs. All age groups have seen an increase in the number of workplace ODs, with 35- to 44-year-olds seeing the biggest jump, 388%. 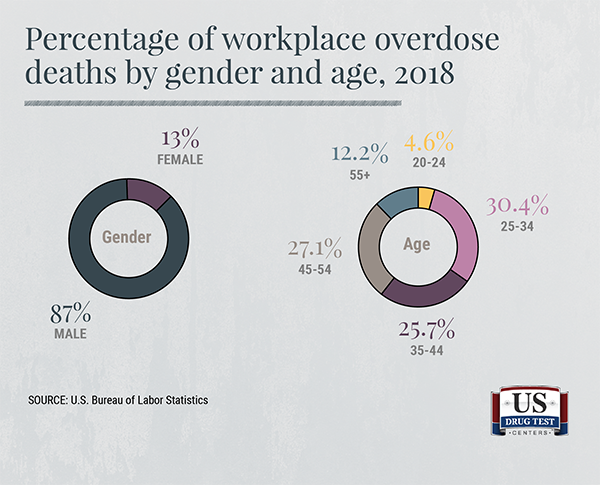 White people accounted for more than 3 in 4 workplace overdose deaths in 2018, with blacks and Hispanics each accounting for about 1 in 10. 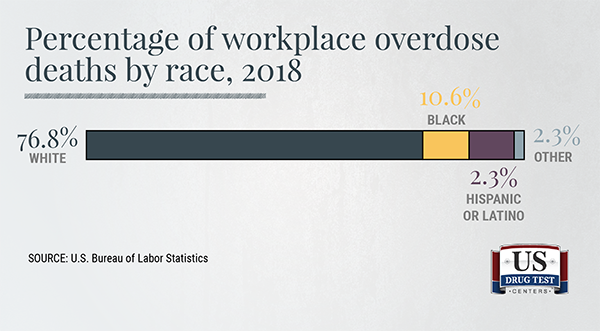 How & When Do Incidents Occur?

Almost all workplace overdose incidents involve medications or street drugs, though the BLS data does not specify what types of drugs were involved. But we know from broader health data, that opioids are involved in the majority of drug overdoses, or about 2 in 3 drug ODs in 2017.

The majority of fatal workplace overdoses involve a mix of at least two substances, medications or drugs, while a tiny percentage were from alcohol alone. 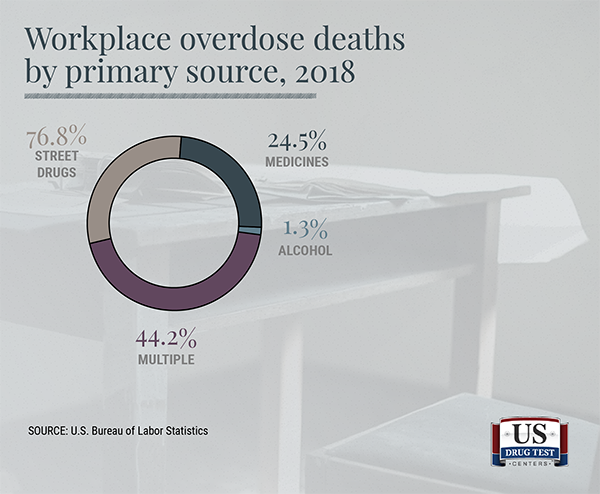 Jobs that involve heavy machinery tend to be the most dangerous generally, and this largely holds true even when looking at accidental overdose deaths in the workplace. Still, about 1 in 4 workplace ODs involved people working in service occupations. 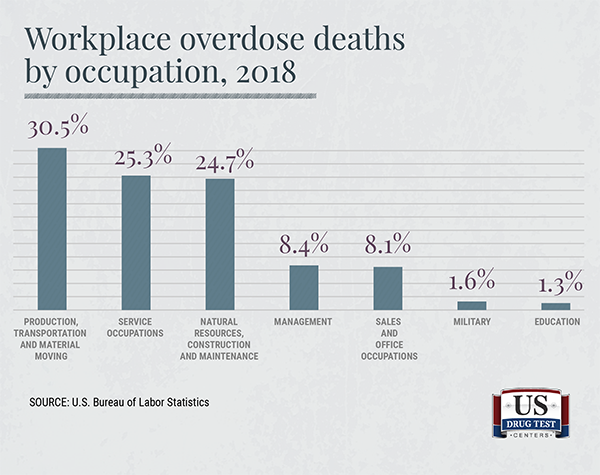 Fatal overdoses at work peak during the summer, falling to their lowest rates at the end of the year. About 1 in 3 workplace ODs in 2018 took place between June and August. 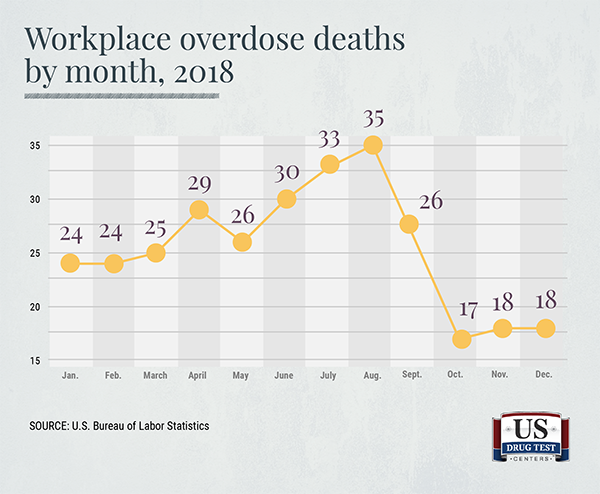 Tuesdays are the deadliest days for fatal workplace overdoses, accounting for nearly 20% of all incidents in 2018, followed by Fridays and Saturdays. Sundays account for less than 8% of incident days. 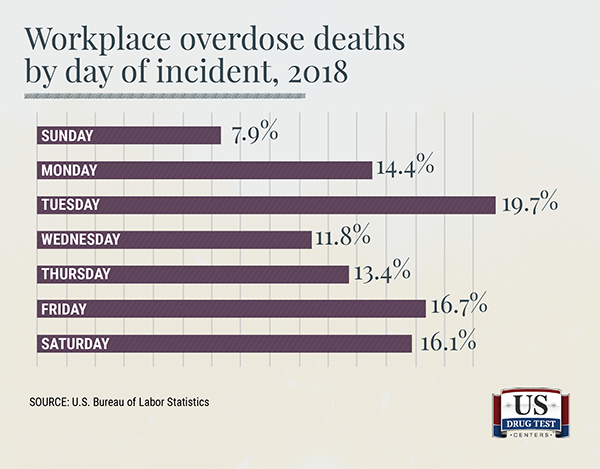 Massachusetts had the highest number of workplace overdose deaths in 2018, and according to the state government, accidental overdoses were the single leading cause of fatal injuries at work in 2016, accounting for 1 in 4 workplace deaths in the state. [4]

BLS data on workplace overdoses is not available for every state, but the available data shows us that a handful of states have troublingly high rates of fatal overdoses at work. Such deaths occur at a rate of about 0.9 per 1 million people overall in the U.S., but about nine states for which data is available have rates quite a bit higher, including several that are multiple times above the national average. 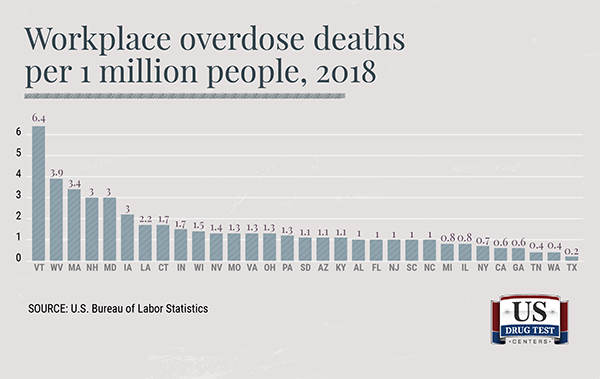 Four of the top 10 states are in the Northeast, three are in the South, and one is in the Midwest. The West does not have a state among the top 10, and Nevada is the highest-ranked Western state. 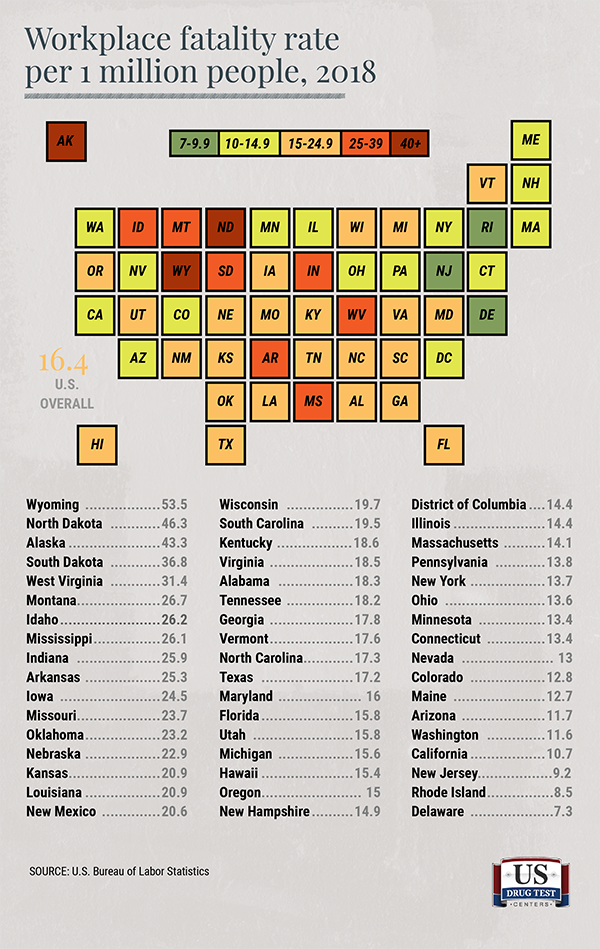 Interestingly, two states (West Virginia and Indiana) appear in the top 10 of both total workplace fatalities and workplace overdose deaths, which is quite concerning for people in those states. West Virginia also has the nation’s highest rate of drug overdose deaths, according to the Centers for Disease Control and Prevention — 57.8 per 100,000 in 2017, the most recent year for which the CDC has reported the states’ rates. This compares to a national rate of 21.7 per 100,000. [5]

Reasonable people can disagree about the wisdom of decriminalizing marijuana and generally having more lax views on drug use, but there can be no doubt that showing up to work under the influence of drugs and alcohol is a risky recipe for disaster. At least one survey, on the other hand, shows that many people are doing just that: An estimated 1 in 4 respondents in weed-legal states said they’d gotten high while at work. And with opioid use remaining high, it seems clear that many people are doing the same with serious painkillers.

As mentioned at the top, all of our information on workplace fatalities came from the U.S. Bureau of Labor Statistics’ 2018 Census of Fatal Occupational Injuries, which was published in late 2019.

The tables we consulted are all listed below. As we noted, only 31 states had data covering the number of fatal workplace overdoses. However, that does not indicate that those states had no such deaths, and the BLS data is limited by its sources of information. For instance, in many cases, the agency relies on news reports to determine causes of death for workers who die on the job.