State Drug Testing Rules: A Web of Compliance and Opportunity 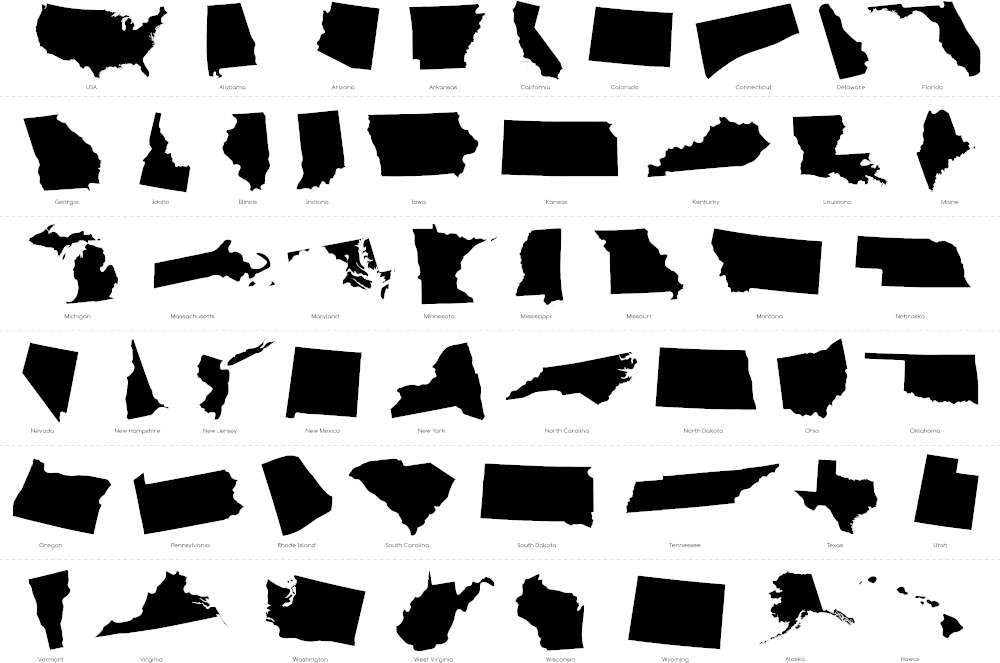 For employers conducting workplace drug and alcohol testing, the landscape of rules, regulations and court decisions have changed dramatically over the last decade. The days of a single company-wide or "template" drug testing policy are long gone, but many employers either haven't recognized this or have been unwilling to adapt their screening programs appropriately.

Employers that fail to keep a pulse on the rules and regulations that apply to their screening program are exposed to higher risk and liability than ever before. For some employers, waiting to find out the hard way leads to undesirable consequences to the company's reputation, integrity, and financial losses.

In the most basic of sense, employers should consider the following facts:

Those states that offer workers' compensation premium discounts or the affirmative defense of a rebuttable presumption of intoxication are voluntary - employers don't have to abide by their rules. But the benefits that are included with those programs can be significant to a company's bottom line. These benefits are only available to employers who voluntarily establish their drug testing programs by the rules detailed in the statutes or regulations of those states.

Here, we are going to review some of the rules that employers may face when establishing and maintaining workplace drug and alcohol testing programs.

Remember, these state rules do not apply to federally regulated employees such as commercial drivers regulated by the Department of Transportation (DOT).

22 states and Washington D.C. (See Map below) have mandatory state drug testing rules applicable to the private, non-regulated workplace.[1] If you are in one of these twenty-two states and you wish to conduct workplace drug and alcohol testing of your non-regulated employees, you must perform those tests by following the rules that the legislature and, in some states, the applicable state agencies or courts, have established.[2] 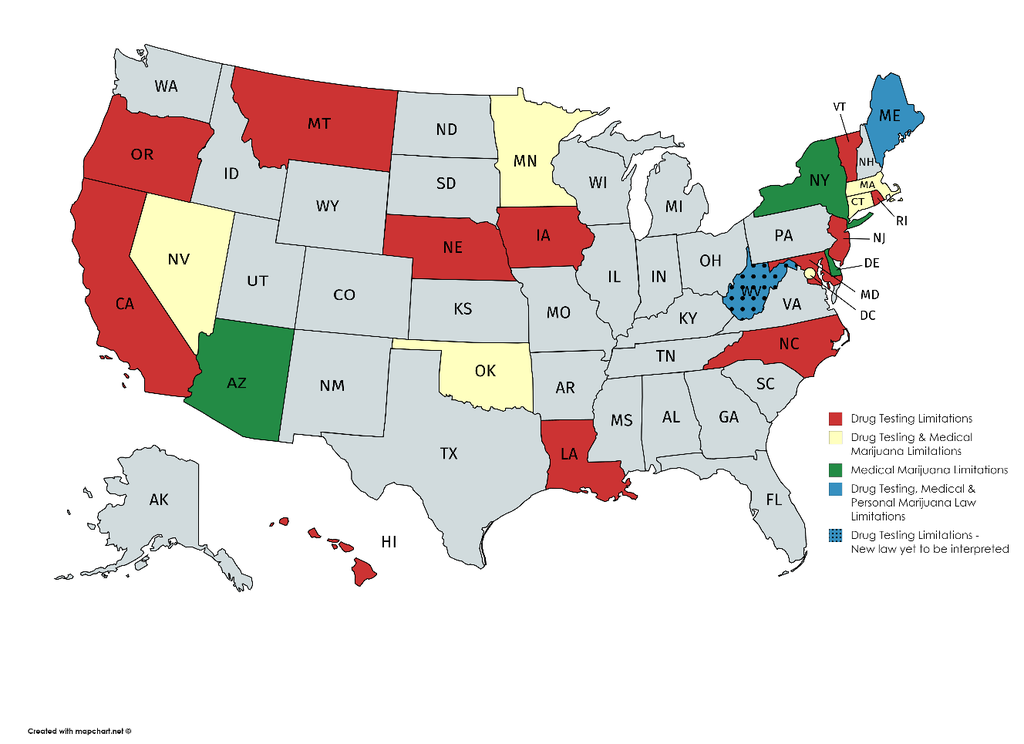 Some of these mandatory states have straightforward rules. California, for example, has one basic requirement: random testing is limited to those in safety-sensitive or security-sensitive jobs. This rule was established by the California Supreme Court in 1997 in a case named Loder v. The City of Glendale.[3] Unfortunately, the Court left open the definition of a safety or security position, saying that it was best determined on a case-by-case basis.

The rules in some other states are incredibly detailed. For example, Oklahoma’s Standards for Workplace Drug and Alcohol Testing Act[4] is exceptionally complicated. The statute is further complicated by the regulations published by the Oklahoma State Department of Health.[5] And further complications are the result of the many court decisions interpreting the statute and regulations.

Other very complex states include, but are not limited to Iowa, Maine, Maryland, Minnesota, North Carolina, and Rhode Island. Four states, California, Massachusetts, New Jersey, and West Virginia are considered mandatory due to decisions of these states' highest courts.

Failure to adhere to the rules in these mandatory states can be costly. For example, a federal District Court in Connecticut ruled in favor of an employee involved in a workplace incident when the employee was required to submit to a post-incident test as required by the company's national corporate policy. The employee later sued to claim that the employer violated General Statute in Connecticut (§31-51x) which prohibits testing unless the employer has "reasonable suspicion that the employee is under the influence of drugs or alcohol which adversely affects or could adversely affect" an employee's job performance.[6]

The company argued that the accident itself (forklift damage to product) was evidence of reasonable suspicion. The company suggested that accidents have a "high correlation to drug use." The Court disagreed and ruled for the employee, finding that since the employer's policy did not require a showing of "individualized suspicion" it violated Connecticut law.[7]

Another example of the cost of non-compliance with mandatory state rules is found in Oklahoma. An employer lost over $750,000 (with an estimate of costs and attorney's fees) when it was found in willful violation of the rule requiring the use of a "qualified test facility" to conduct its testing.

What about specific issues? Here are some examples of states (mandatory and voluntary) that limit employer actions:

Require the use of an MRO - Twenty-two states[11] require employers to use a Medical Review Officer (MRO) in the test process (see Map below). Why is this important? The drug test process involves three service providers: 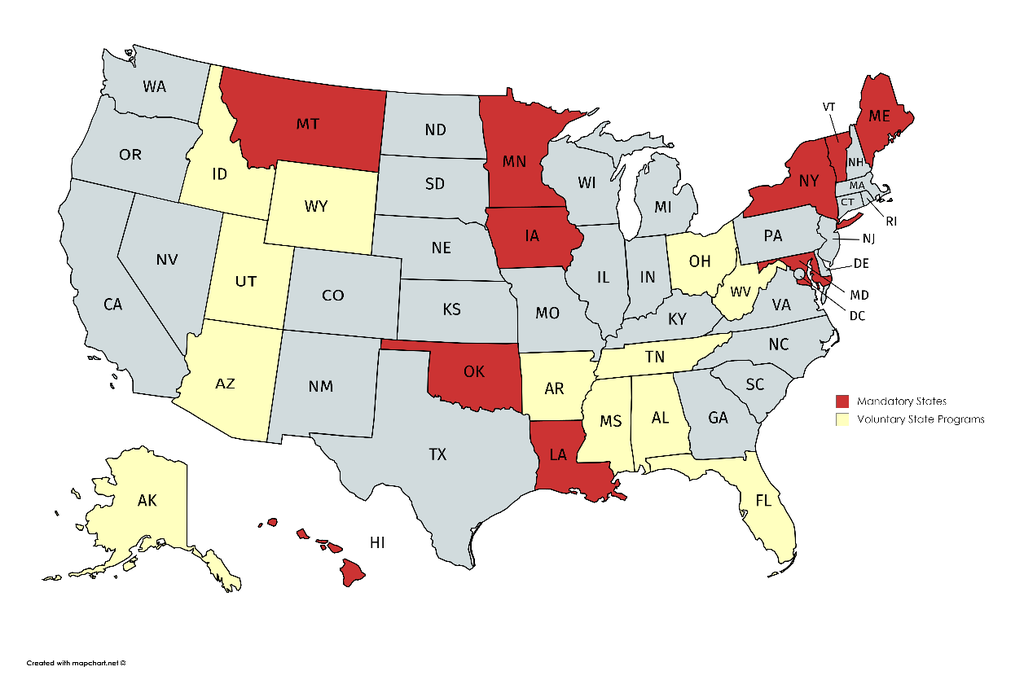 Thus far, we have shown you some of the compliance pitfalls to be aware of in the various state's rules. But, for employers, where is the reward in doing drug testing? Sure, it's assumed that having a drug and alcohol drug testing policy will contribute to a safer, more productive drug-free workplace but there is a cost associated with that effort.

First, your return on that investment (ROI) can be found in avoiding costly litigation by establishing and maintaining your testing program in compliance with the rules that apply to your testing program. Second, there are state programs that will reward your efforts. These are voluntary programs – you do not have to abide by these rules. But if you do you could see the significant financial benefits that go right to your company's bottom line.


There are three types of voluntary programs that provide a return on the investment in a drug and alcohol testing program.

How does this work? If an employee is injured at work, tests positive for a drug or alcohol, and then files for workers' compensation benefits, employers have the right to raise a defense to the employee receiving benefits. If it is to be presumed that the drug test result is evidence of "intoxication" most states will allow employers to argue that the employee's intoxicated state at the time of the injury is what resulted in that employee's injuries and therefore the employee should not receive benefits. These rules vary widely by state.

You see how difficult this could be. But in the 19 states shown, if the employee tested positive on a drug or alcohol test performed in accordance with the state’s rules both intoxication, then, in most of the 19 states, "cause" is presumed! The employee must then prove that something other than his or her intoxication led to their injuries. That can be very difficult to do.

Employers in these 19 states see substantial financial rewards from this defense. But these rewards are available only if the tests were performed according to the rules established by the various state programs.

The important take away here is that the rules, regulations, court decisions and financial opportunities of workplace drug screening in each state differ, so it's essential to know the rules and opportunities that apply to your screening program. While compliance may seem complicated, these rules are an employer's roadmap to their success. Take the time to understand what applies, how to properly implement and manage your screening program, and make sure you routinely review the details as this legal landscape changes often. Trust me; the effort will certainly be worthwhile.

The expert US Drug Test Centers team can help you get started or review your current program. Contact us today.

[1] For example, Iowa Code 730.5(2) states in part as follows: "Applicability. This section does not apply to drug or alcohol tests conducted on employees required to be tested pursuant to federal statutes, federal regulations, or orders issued pursuant to federal law." Most mandatory states have such a provision or have been interpreted by courts to only apply to non-regulated testing.
[2] Note: Three states are mandatory due to medical marijuana rules and five because of both medical marijuana and drug testing rules.
[3] 14 Cal. 4th 846. (1997).
[4] O.S. §§551-563.
[5] OAC 310:638.
[6] Gen. Stat. §31-51x(a).
[7] Doyon v. Home Depot U.S.A., Inc., 850 F. Supp. 125 (D. Conn. 1994).
[8] The prohibition or limitation may result from the requirements in a voluntary state.
[9] While the state of California does not have a specific statute, regulation or court decision prohibiting or limiting hair testing, it is believed that hair testing could upset the delicate constitutional balance in employee's favor.
[10] The reference to Florida is to its voluntary state program.
[11] Including voluntary states.
Back to Resources