Americaâ€™s Opioid Crisis and its Impact on the Workplace 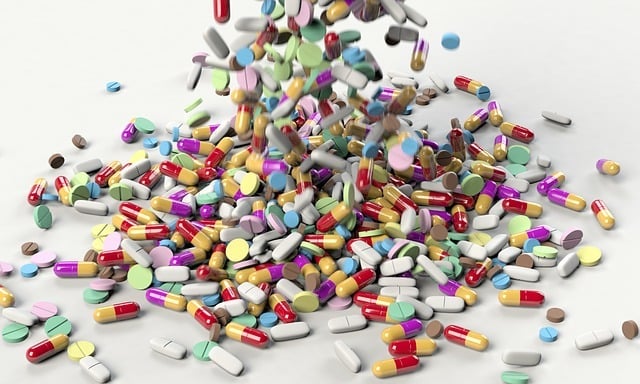 By: Jonathan Baktari, MD / CEO of US Drug Test Centers

A disturbing trend has been emerging in the workplace, and it's driven by the use and abuse of opioid painkillers – now the most widely prescribed pain relievers and most highly abused prescription drug.

Companies and organizations of all sizes have an important role in promoting the health and safety of employees and managing risks in the workplace. Employers who have strong workplace policies, education, health benefit programs, and well-trained managers can help create safe and healthy environments in which both employees and business thrive.

Employees' rights to a safe and healthy workplace are not only being recognized by federal enforcement agencies but also by the courts. Employee rights and protections stem from employers' obligations created by federal and state statutes. It's time to stop pointing fingers and start looking at solutions to make a difference in the lives of opioid users in your workplace.

In 2006, a scientist at the Centers for Disease Control and Prevention (CDC) noticed "an uptick" in poisoning deaths. Prescription opioids were identified as a primary concern.[1]

There are regional and state differences in overdose deaths reported. The CDC says that the latest numbers show that, in order, West Virginia, Ohio, Pennsylvania and Kentucky are the states with the highest rates of deaths due to a drug overdose.[5]

Frequently, doctors are blamed for providing the opioids that are killing Americans.  While it is true that doctors are a leading source of prescribed opioids, most people get the drugs that are abused by friends and relatives. 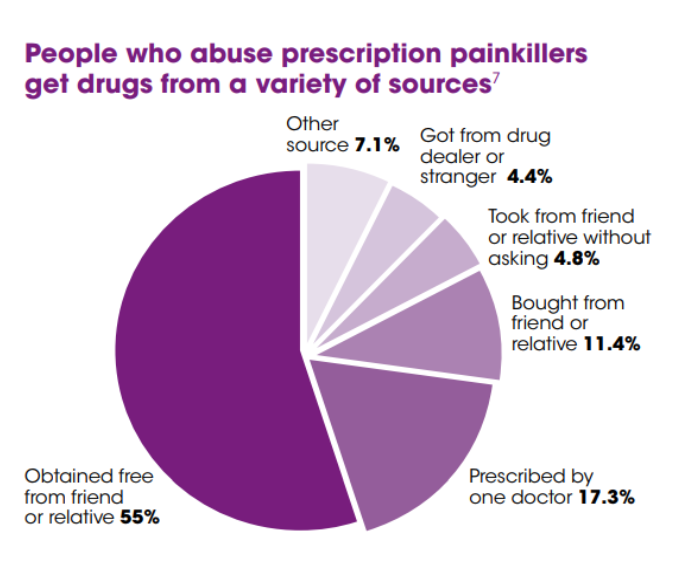 The source of these drugs is one thing, the cause another. Why is this epidemic happening? In part, it can be explained by pain. The National Institutes of Health has reported that "at least 116 million U.S. adults are burdened by chronic pain" and annual national economic cost associated with chronic pain estimated to be $560–635 billion.[6]

Chronic pain can be a disease in itself. Chronic pain has a distinct pathology, causing changes throughout the nervous system that often worsen over time. It has significant psychological and cognitive correlates and can constitute a serious, separate disease entity. https://www.ncbi.nlm.nih.gov/books/NBK92510/

The response to chronic pain is where part of the problem begins. According to a recent report by the CDC "[m]ore than 11.5 million Americans, aged 12 or older, reported misusing prescription opioids in 2016."[7]

As the chart above indicates, people who abuse drugs primarily get them from friends or family members. But the CDC noted that "those at highest risk of overdose are as likely to get them from a doctor's prescription."[8] In 2016, the CDC issued guidelines to help educate physicians when issuing opioid prescriptions.[9] Those Guidelines indicated that in 2012 "health care providers wrote 259 million prescriptions for opioid pain medication, enough for every adult in the United States to have a bottle of pills."[10]

How does this impact the workplace? It would be foolish to think that it doesn't. There are more statistics about opioid abuse than baseball. It has been reported that “unintentional overdoses due to nonmedical use of drugs or alcohol while at work increased 25.3%" in 2017.[11] It was further reported that "this was the fifth consecutive year in which unintentional workplace overdose deaths have increased by 25% according to the BLS fatality data."[12]

One study found that the injury rate for construction workers is 77% higher than the national average and that 15% of construction workers struggle with substance abuse.[13] The New York Times reported in 2012 that this results in "workplace insurers" spending an estimated $1.4 billion annually on narcotic painkillers. This can result in significant delays in injured workers getting back to work. As noted in the publication Spine those receiving early pain medication on average experience 69 days longer to return to work and are three times more likely to have surgery.[14]

A study released in August 2018, that focused on the Midwest construction industry, found that nearly 1,000 construction workers died from opioid overdosed in 2015 (see chart) and that the opioid epidemic had resulted in costs of $1.5 billion. 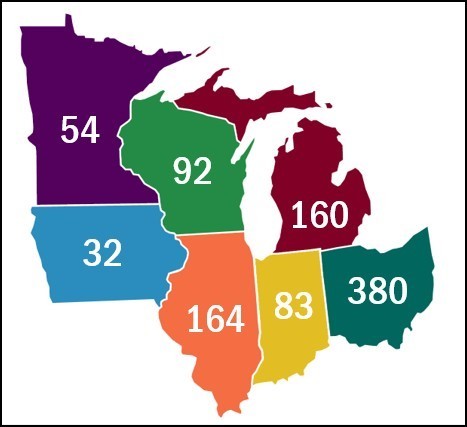 This opioid issue goes far beyond just the Midwest, however, alarming use, abuse and overdoes stats can be found between all four corners of our great country and most industry sectors are affected. One of many studies by Quest Diagnostics[15] showed drug misuse rates remain constant at high levels, and dangerous opioid-related drug combining is prevalent, in 2017. More than half of Americans tested misused their prescription drugs and drug mixing is the most frequent form of misuse with one-in-five test results showing concurrent use of opioids and benzodiazepines in 2017. Quest Diagnostics also provides an interactive map of "Opiate Positivity by Zip Code"[16].

Many employers are recognizing the serious problem with opioids in the workplace and are beginning to respond.[17] Employer responses include adding synthetic and semi-synthetic opioids to their test panels and requiring employees to report medications they are taking. Such responses can cause problems under the Americans with Disabilities Act (ADA) and state disability discrimination rules. Let's first look at the federal response and then how private, non-regulated employers are addressing the issue.

On November 13, 2017, when the Final Rule was announced in the Federal Register[18] The Office of the Secretary of Transportation explained that it was required to add these synthetic opioids to the required test panel in order to harmonize its rules with the Department of Health and Human Services (HHS). However, the OST also explained, "Inclusion of these four semi-synthetic opioids is intended to help address the nation-wide epidemic of opioid abuse."[19]

The addition of these synthetic opioids raised questions about handling prescriptions. DOT addressed these questions making several key adjustments to the MRO's role.

The Medical Review Officer (MRO) performs a critical function in employee drug testing programs. The MRO receives, reviews, and interprets laboratory results. The MRO is essentially a gatekeeper[20] between laboratory results and the employee. In programs without an MRO applicants and employees could be falsely accused of using illegal drugs when in fact legally prescribed drugs caused the laboratory result. This could lead to litigation.

In quality employee drug testing programs there is no test result until the MRO says there is. The MRO's key function has become all the more important with the opioid epidemic, now in its thirteenth year.[21]

The substantive adjustments that DOT made related to synthetic and semi-synthetic opioids include:

"In determining whether an employee's legally valid prescription consistent with the Controlled Substances Act for a substance in these categories constitutes a legitimate medical explanation, you must not question whether the prescribing physician should have prescribed the substance."

This according to DOT takes the "second-guessing" out of the review process.

If a legally valid prescription exists and explains the laboratory result the MRO must report that result as negative. If the MRO has concerns about the employee's use of that prescribed medicine and performing safety-sensitive tasks the MRO is directed by §40.135(e) to provide the employee with up to five business days after reporting the verified negative result to the employer to have the prescribing physician contact the MRO "to determine if the medication(s) can be changed to one that does not make the employee medically unqualified or that does not pose a significant safety risk before reporting the safety concern."

This allows the MRO to report the negative result first and then if necessary, report a safety issue.

But the MRO's obligation under §40.327 remains. Under this section an MRO reports drug test results and medical information the MRO learns as part of the verification process without the employee's consent if the MRO believes, in his or her reasonable medical judgment, that either of two concerns is triggered

Private employers not subject to federal regulations face other challenges in response to this epidemic. It has become very clear that employers are struggling to react as shown in a study, in 2017, conducted by the National Safety Council[23], that highlighted:

But private, non-regulated employers must take care how they react to these challenges. In addition to the estimated costs of the epidemic itself, inappropriate responses to the crisis could be costly.

Two seemingly logical responses that employers are making can create problems. Employers are adding substances to their test panels without first determining if that is appropriate and they are requiring all employees to report medications they are taking which may violate the ADA and state disability discrimination laws.

Will switching from a five-panel to a twelve-panel help address this problem?  Perhaps, but employers must first determine if doing so is allowed under the ADA.

But including legally prescribed drugs in a test panel without first determining on a case-by-case basis that doing so in "job-related and consistent with business necessity" may cost employers dearly. In just one example, in Tennessee, an employer decided to conduct a "twelve-panel" drug test for all employees, which included legally prescribed medications.[24] Those who tested positive were suspended and ordered to stop using their medication or lose their jobs. The EEOC sued the employer on behalf of the employees resulting in a consent decree costing the employer $750,000.[25]

Employers are also responding to the opioid crisis by requiring all employees to report medication they are taking. Like expanding your test panel this too could violate the ADA.

The EEOC has interpreted the ADA and in a 200 Enforcement Guidance[26] the EEOC posed the following question and answer:

"May an employer ask all employees what prescription medications they are taking?"

Generally, no. Asking all employees about their use of prescription medications is not job-related and consistent with business necessity. In limited circumstances, however, certain employers may be able to demonstrate that it is job-related and consistent with business necessity to require employees in positions affecting public safety to report when they are taking medication that may affect their ability to perform essential functions. Under these limited circumstances, an employer must be able to demonstrate that an employee's inability or impaired ability to perform essential functions will result in a direct threat.

Not one employer in this country is immune to the opioid epidemic. The time is now for employers to take a proactive role to be as educated and prepared as possible. Employers should:

Jonathan Baktari, MD is the CEO of US Drug Test Centers (www.USDrugTestCenters.com), an industry leader in nationwide drug testing.

[5] https://www.cdc.gov/drugoverdose/data/statedeaths.html. That site also has an interactive map showing the data for each state.

[22] This is of course not to suggest a company policy couldn’t prohibit over-the-counter medications, they simply are not addressed under the DOT rules.

This article will be in DATIA's Spring 2019 FOCUS Magazine